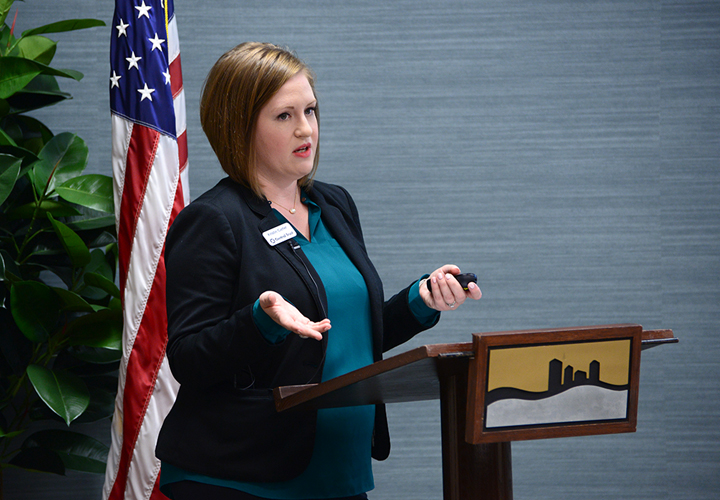 When President Trump signed the Tax Cuts and Jobs Act into law on December 22, 2017, it marked the biggest change to federal tax law in more than 30 years. It changed nearly all facets of tax planning – individual tax, trust and estate planning, and business tax – in numerous ways.

Needless to say, many small businesses are still unsure exactly how they will be affected, or the best way to proceed. Central Trust Company Tax Officer and CPA Kristin Carter offered information on the subject during the Chamber’s October 17 Expert Edge event.

She did spend some time on changes to individual tax law, including how most tax brackets have been widened and rates have been lowered – meaning that for most taxpayers, more income will be taxed at lower rates.

She also noted the significant increase to the standard deduction for individual taxpayers, meaning far fewer taxpayers are likely to itemize deductions on next year’s tax returns.

But most of Carter’s presentation focused on changes to business tax law – which she noted were made permanent by the new law. Here are some of the highlights:

As for the future, Carter said the next likely item on the horizon is a technical corrections bill from the IRS, as reform of this scale always requires additional clarification.

“There are plenty of areas of this tax reform that we still don’t know a lot about – we’re still trying to understand the law as it’s written and apply it correctly to our clients,” she said. “Knock on wood, we hope we get more information from the IRS before tax season.”

Carter also recommends individuals and business owners take a couple of actions before the end of the year.

Notably, she says that with the changes to individual tax rates, withholdings likely changed during the year, so individuals should perform a “paycheck checkup” to ensure there are no withholding issues.

And a visit to a CPA would be in order, too, especially for those who pay estimated quarterly tax or for business owners to strategize year-end spending.