Making the case for transportation funding through Proposition D 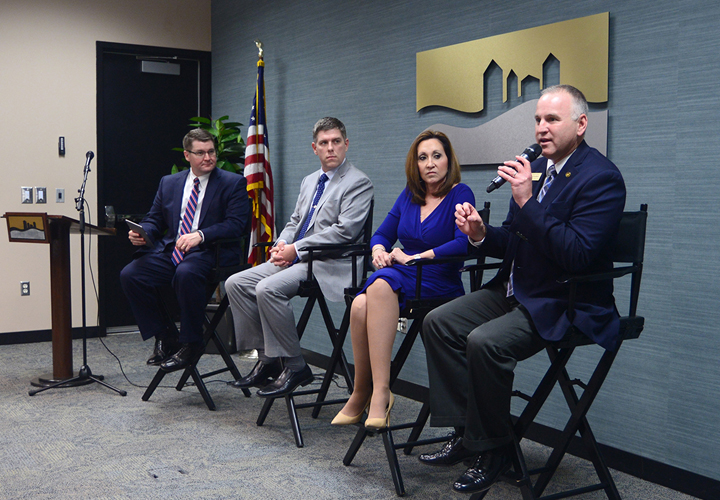 When it comes to funding for Missouri’s transportation infrastructure, Mayor Ken McClure says our state is – no pun intended – “at a crossroads.”

“The state is geographically located in the ideal spot in the middle of the nation, one day’s drive from either coast,” the mayor said. “Our rivers, the Mississippi and the Missouri, are so critical for moving people and freight. And along with our other modes of transportation, those things give us the chance to be a strong hub for transportation.”

The mayor was speaking to a group gathered at the Chamber on September 27 to hear about Proposition D, the statewide ballot initiative on which voters will decide in November.

If approved, it will increase the state’s motor fuel tax by 10 cents over four years—the first increase to the state tax since 1996. The increase would generate an estimated $288 million annually for the State Road Fund, which funds both state construction projects and the Missouri Highway Patrol, and $123 million for local governments for road construction and maintenance.

Note: The Chamber board has endorsed Proposition D, and the Chamber strongly encourages its members to vote YES on the issue on November 6. The SAFERMO website has more information about the potential positive impacts of supporting Proposition D.

“The cost of doing nothing”
And the “crossroads” to which the mayor referred? That’s the funding crisis in which the state’s road network currently finds itself.

Patrick McKenna, director of the Missouri Department of Transportation, was also at the September 27 event to offer information about the current funding situation, though he did not advocate for or against Proposition D. Instead, he spoke to those in attendance about what he calls “the cost of doing nothing.”

McKenna offered startling figures about both the scope of the state’s road network and its condition:

Supporting the system
After McKenna had offered his information, a panel of Prop D supporters spoke about why they back the proposal.

State Rep. Kevin Corlew led the 21st Century Missouri Transportation System Task Force, which held hearings statewide in 2017—including one at the Chamber in August—to collect input from the business community and general public about the importance of transportation and funding ideas.

Corlew said he supports Proposition D because it addresses a variety of needs, from road safety to local funding for cities and counties—by statute, 15 percent of the funding from the state road fund goes to cities and another 15 percent goes to counties.

“We heard from everyone that we need to invest in the system – for people’s families, for connectivity, for the business community, for manufacturers’ just in time delivery, and for farmers to get to market,” he said. “When you look at Prop D, it hits on all of those areas.”

That funding for local entities is a big selling point for Dan Kleinsorge, manager of the SAFERMO organization that is leading the campaign to pass Prop D. As a resident of Callaway County, he remembers the needs rural counties had for road funding.

“Look at those WPA bridges built in the 1930s; I went over some of those in school buses when I was in school. That bridge is still there … and it was old then. I don’t know the last time it was looked at, but it probably needs work,” he said. “I’m excited about what rural counties can do with this influx in road money.”

“Right now, the people that work for us are very anxious about the future, and I have real concerns about losing talent in the infrastructure industry, like we did in the housing market during the recession,” she said. “For me, it’s about people. We need to be able to keep their jobs here.”

She also noted that if a federal infrastructure package is approved in the near future, it would likely be structured around matching dollars, making it crucial to have state funds ready. “We’re going to give up millions of dollars if we don’t have the money in our bank account to match those funds,” she said. “I don’t want Missouri to be one of those states that aren’t ready to take advantage.”