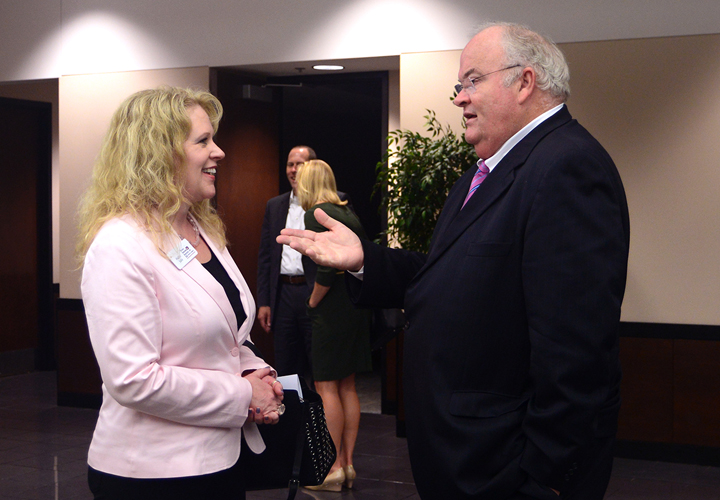 Congressman Billy Long says one of his favorite – and most important – parts of his job as member of the U.S. House of Representatives is connections … whether it’s making connections with people or connecting people with the resources and answers they need.

The congressman was at the Chamber on August 29 as part of the Public Policy Speaker Series connecting with a room full of the area’s business leaders, telling them about what is happening in the nation’s capital and what the future might hold.

One example of making connections: when Long was at the unveiling of the first “tiny homes” in the Eden Village development on August 28.

“I had a man come up to me who said his Social Security benefits had been cut and he was homeless now,” he said. “The cut had been because of an address mistake. So I called someone in my office. We can help with those things.”

Long said he loves being able to help people with those kinds of issues, especially when people realize he is not going to “check their political affiliation at the door” when they come to his office for help.

He noted that he is especially thankful for his staff: “I follow the Teddy Roosevelt school,” he added. “Hire good people and have the good sense to get out of their way and let them do their job.”

But Long also talked about the work he is trying to help accomplish at the national level, including infrastructure. He noted that Missouri’s efforts to fund its own needs through Proposition D on the November ballot are a step forward, especially since there has not been much progress at the federal level.

Long said he also is aware of the desperate need for workforce development and training, specifically praising Gov. Mike Parson for his work calling attention to the needs in that area. He also pointed to the GO CAPS program as one step in the right direction.

“GO CAPS is a fantastic example – I try to hook people up with the program wherever I go,” he said, referencing the year-long program that allows high school juniors and seniors to test drive future career options and develop real world experience by working in partner businesses. “I’m all in.”

And the congressman is aware of the need for free trade, as well. Long, who is co-chair of the Congressional Study Group on Japan, said it took a lot of work to get Japan to agree to the terms of the Trans-Pacific Partnership – so he was especially disappointed when the U.S. walked away from the agreement because “it became the flavor of the month to bash trade on both sides” during the last presidential election.

“It has turned so much in recent years,” he said. “But I’m a free-trader, and most Republicans were always free-traders.”