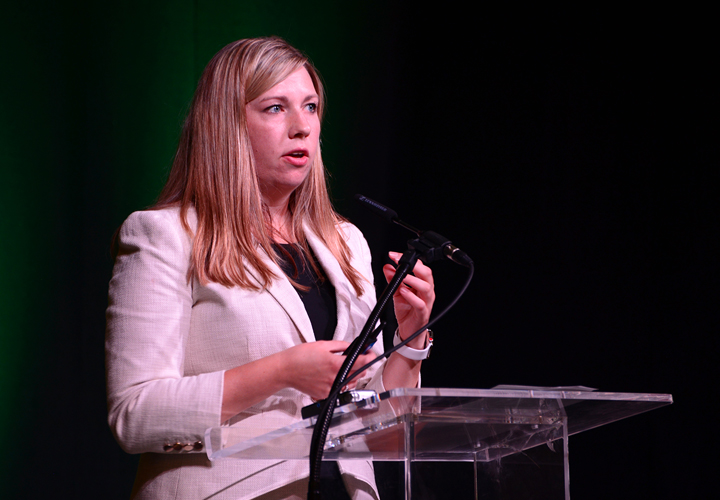 The national economy is currently strong, and it will remain strong through at least the end of 2019, according to the keynote speaker at the SBDC’s recent Economic Outlook.

Kathleen Navin, director of US Economics at Macroeconomic Advisers by IHS Markit, presented her take on the near future for the economy to more than 320 business and community leaders at August 22 at the University Plaza Convention Center. The SBDC – the Chamber’s economic development arm – hosts this event each year to provide its investors with expert insight into regional and national economic trends.

A warning about employment
With unemployment rates at historic lows and equities at all-time highs, it’s hard to imagine that the economy could continue to grow … and yet that’s the forecast Navin presented.

IHS Markit predicts solid GDP growth of 3.2% in 2018, falling to 2.3% in 2019 – still above the historic 2% average – and unemployment rates that will continue dropping, to 3.4% nationally by mid-2019. This will allow the Federal Reserve Bank to continue raising interest rates, with two more rate hikes expected this year and three additional increases in 2019.

Navin noted that the strength and continued growth of the economy are driven in part by consumer activity and government spending, including the stimulus from the Tax Cuts and Jobs Act of 2017.

But her presentation included a warning. As the Fed continues to raise interest rates, she said it can be difficult to predict when to stop “applying the brakes” to the economy causing a mild recession beyond 2019. Or, not enough rate increases by the Fed could lead to another “boom-bust” cycle in 2020.

“Based on our incredibly low unemployment rate [and other factors], recession is likely within five years or less,” she said, noting that unemployment rates are expected to begin their inevitable increase sometime in late 2019. “With the economy, a soft landing from below is like searching for a unicorn – it’s unlikely. There is the risk of overheating, creating a boom from overstimulus.”

Local preparation
With the potential for a slowdown in coming years, being prepared to compete with other markets for new jobs and new businesses is more crucial than ever. Preparation was the focus of opening remarks by Ryan Mooney, the Chamber’s senior vice president for economic development.

To make Springfield more attractive to companies creating jobs, Mooney said the key is having the available real estate and available workforce. As a community, we have issues to address in both areas.

The industrial real estate vacancy rate in our area is at a very low 4.4%, while office vacancy rates are only at 5%. This means businesses looking to move into the area or expand are hard-pressed to find the space they need.

The same difficulty holds true when it comes to workforce and worker availability is of the utmost importance to location decisions. The Springfield MSA 3% unemployment rate is even lower than the national rate, and companies looking to add jobs or fill existing vacancies continue to have difficulties finding the right candidates.

Mooney pointed out that the answer is not coming from the next generation of workers, as millennials (who are already entirely in the workforce) outnumber the generation following them by more than 27 million nationally.

“We have to get people to come to Springfield, because we’re competing with many other communities in the same boat,” Mooney said, adding that Springfield’s overall population growth of 1% per year also lags behind the historical average. “We need to invest in placemaking to encourage population growth.”