Governor: Outlook is strong if we support infrastructure and workforce 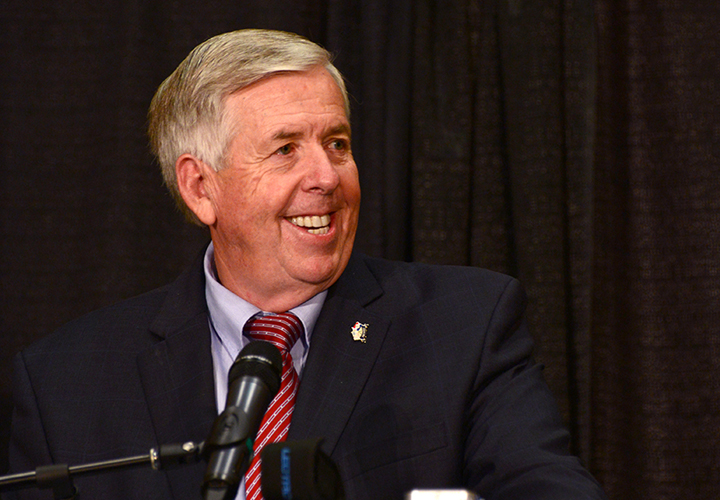 Gov. Mike Parson received a warm southwest Missouri welcome when he took the stage August 1 as the keynote speaker for the Chamber’s inaugural State of the State event at White River Conference Center.

His message to more than 400 people in attendance was clear: Missouri’s economy is headed in the right direction, and the Springfield region is leading the charge – but continued success will depend on the state’s ability to face looming infrastructure and workforce needs.

The governor is no stranger to our region, having formerly served as sheriff of Polk County and the state senator for the 28th District.

He praised the growth of southwest Missouri over the years, recalling as an example when the Battlefield Mall was first built in 1970. “I thought to myself, ‘They must be crazy … who’d want to come shop way out here in the middle of nowhere?’” he joked.

And he said we are poised for continued growth – he pointed to the state’s 3.5% unemployment rate, lower even than the national rate of roughly 4% – and the second-quarter GDP growth of 4.1% nationally as signs that the economy is strong.

To continue that momentum for the state, the governor asked attendees to support Right to Work by voting “yes” on Proposition A at the ballots on August 7 (see sidebar).

But he also pointed to the two areas that could subdue our state’s strength if not addressed head-on. “I’ve traveled all over the state in my first 60 days in office, talking with mayors and county leaders, and they always come back to two issues: infrastructure and workforce,” he said.

A big step to addressing workforce needs, he said, is being undertaken by Director of Economic Development Rob Dixon, who is revamping the department and working to make the state a leader in that area. The legislature’s decision to reauthorize the Missouri Works Customized Training through 2030 is also a significant step toward that effort.

As for transportation infrastructure, he said voters will have the chance to support that crucial effort themselves when they vote in November on the first increase in the state’s fuel tax in more than two decades. Parson noted that a tax increase often causes people to “raise their eyebrows,” but he said we can’t afford to put off the needs any longer if Missouri wants to take the lead in job creation and economic development.

“I don’t want Missouri to be a flyover state,” he said. “And I don’t want Arkansas, or Kansas, or Iowa, or Nebraska to have anything on us.”

(Visit our Photo Galleries page to see more images from the day's event.)