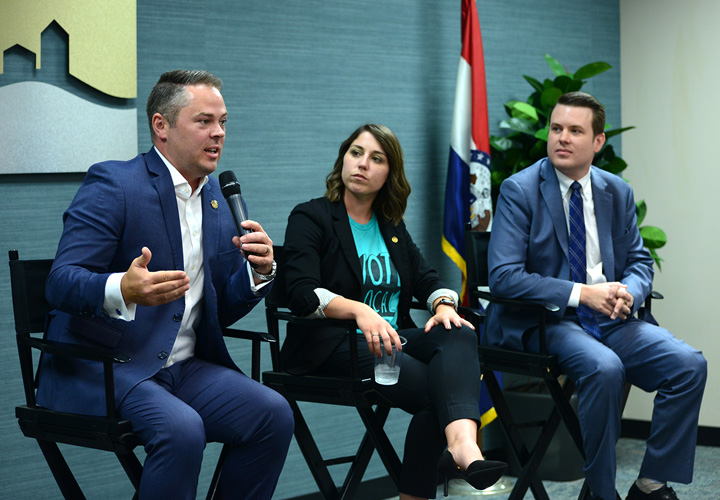 The Springfield region likes to talk with great pride about its willingness to give young professionals a “seat at the table” – a chance to be heard, to be involved in the decision-making process and shape their own future.

On July 18, three YPs who have already decided to get involved in public office spoke to members of The Network at the latest Access to the Issues event about what it’s like to be an officeholder, and how they’re working to shape the community.

Two members of the Missouri House of Representatives – Speaker Pro Tem Elijah Haahr and Rep. Crystal Quade – and Springfield City Councilmember Matthew Simpson offered a look at the possibilities and challenges of their roles in office. They also talked about why it’s so important to be civically engaged.

New faces in the Capitol
Haahr, who will be the first speaker of the house from Greene County when he assumes the role in 2019, talked about how Springfield’s unique collaborative spirit should help him be effective in his new position.

For Quade, who just finished her first term in the house and is running for re-election to represent central Springfield, she knew she wanted to run for office from the second week of her internship in the Capitol. She knows she is one of the youngest members of the legislature, but she ignores questions about her youth by focusing on the issues.

“I would talk about why I was there and why my perspective is important,” she said, noting that the lack of proportional female representation in Jefferson City – only 36 women held seats in the legislature this session – was a driving force behind her decision to run. “I was not going to wait my turn.”

New local leaders
And young leaders are taking their place locally as well. Simpson was appointed to City Council earlier this year to fill the open Zone 4 seat. He has been a strong advocate for bring proud of what Springfield has to offer, even in the face of its challenges.

“We all made decisions to either stay here, move here or move back, and we have to do what we can to keep making this a great place – not just for us but for our kids,” he said. He pointed to our higher education and training environment as potential ways to combat issues like poverty. “We have a unique opportunity to grow and do great things, and if we don’t do everything we can, we are doing ourselves a disservice.”

Power in Jeff City
Both Haahr and Quade said the Springfield region’s strength is being noticed in the Capitol as well – and YPs should be involved in shaping the future.

“Southwest Missouri as a region is gaining more attention,” Haahr said. “A lot of leadership in the House is from down here, and so is the governor – we are about to hit our zenith of powerful positions.”

Quade said the most important thing is for young adults to get involved in the political arena and bring their perspective, whether it be by running for office or simply making their voice heard. “If the only folks calling in and coming to the Capitol are older,” she said, “our voice is not represented.”