Reflecting on a successful session – and career – in the Capitol 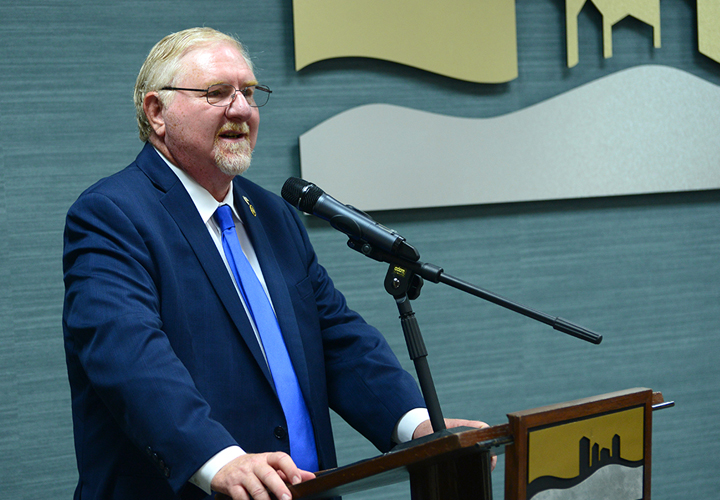 Sen. Jay Wasson is no stranger to Springfield or the Chamber. In his 16 years serving in the Missouri General Assembly – eight years in the House followed by eight years in the Senate – he has been a strong advocate for a variety of Chamber priorities.

And 2018 was no exception, as Wasson helped shepherd a number of key bills to success, most in the last few days of the session. The senator was the guest of the Chamber’s Governmental Relations Committee on July 12, offering his take on the year’s successes, his overall time in the Capitol and the state political scene.

Economic development
Despite a slow start to the session – and despite numerous distractions for lawmakers – many of Sen. Wasson’s top priorities made it to the finish line in 2018.

At the top of the list was reauthorization for the Missouri Works and Missouri Works Customized Training programs, both of which were scheduled to sunset in 2019. Thanks to efforts led by Sen. Wasson, both programs now are authorized through 2030, offering more certainty for businesses looking to relocate or expand in the Show-Me State.

Wasson also said he was happy to have helped pass restructuring of the state’s tax increment financing program, which he said can be an effective tool to help redevelop property that needs assistance with infrastructure – like the proposed IDEA Commons project in downtown Springfield.

Education & workforce
2018 also was a strong year for education and workforce development, thanks in no small part to Sen. Wasson’s efforts.

In addition to the Missouri Works extension, he said Springfield is well positioned in the workforce arena thanks to the passage of the OTC tax levies earlier this year, which will allow the school to expand its own training offerings.

“I’ve seen the success they’re having in Georgia and Mississippi in workforce development, with companies sending their people in for training and getting people working right away,” he said, adding that he wished that he would still be in the legislature to see the fruits of those efforts. “All the bills we’ve passed have now set the foundation for economic development. What (Department of Economic Development Director) Rob Dixon is going to do is take us there, and I wish I was still going to be in office to see it.”

One significant education success was the passage of legislation allowing Missouri State to offer doctoral degrees. That bill, Wasson said, was a trade with supporters of the University of Missouri; they had been opposed to the legislation … but needed support for a separate bill that would lift a cap on their tuition fees.

“In exchange, they gave us their support for the doctorate bill for MSU,” he said. “We got them both done.” That legislation will benefit Ozarks Technical Community College as well, allowing the college to offer four-year degrees in certain circumstances to meet workforce demands.

A philosophy of partnership
That willingness to have discussions with people who have different viewpoints and goals is a hallmark of Wasson’s approach – and it’s the reason he has been able to get so much done in his 16 years in Jefferson City.

“I get worried when people get so caught in their philosophy that they don’t know how to make a deal,” he said, noting that he thinks most people in state government are there for the right reasons. “My philosophies are what I stand on, but I know the person on the other side of the aisle has their philosophies too, and somewhere in the middle, let’s get something done.”

That view is why he has been such a valuable member of the General Assembly. “He seeks feedback from all parties, and he’s most effective because he doesn’t care who gets the credit; he just wants it to get done,” said Teresa Coyan of CoxHealth, who serves as this year’s chair of the Governmental Relations Committee. “He’s been a tremendous partner to the Chamber and our state.”

On the importance of infrastructure funding:
“If your biggest strength is the fact that trucks can cover two-thirds of the country from here in one day, then you have to take care of the roads so that they can do that. We have the fourth-most bridges in the country here. Most of them were built in the 50s – and so was I. And we’re both getting old.”

On humility:
“I tell everyone: Don’t take yourself too seriously. Take your job seriously, but not yourself. You’re not the smartest legislator that walked in the door.”

On professional relationships in politics:
“I don’t care if you’re rich or poor, smart or stupid, a crook or a saint. When you get to the Capitol, all you have is your word. So when you go in there, keep your word, do what you say you’ll do, and it will work out for you.”

On hard work:
“I wasn’t planning on being the next governor or president; I just wanted to be decent at my job. The greatest honor I’ll ever have in my life was people like you voting for me and putting me there. I’m not all that bright, but I work hard. It hits me pretty hard that people have that kind of faith in me.”

On support from the Chamber:
“The Springfield Chamber is such a strong chamber, and so diverse in the businesses it represents. When the staff of the Chamber or members come to me and say, ‘here are our priorities,’ I know it’s from the bottom up. The advice I’ve gotten from their staff has always been trusted and made my job much easier.”