The power of encouraging employee education 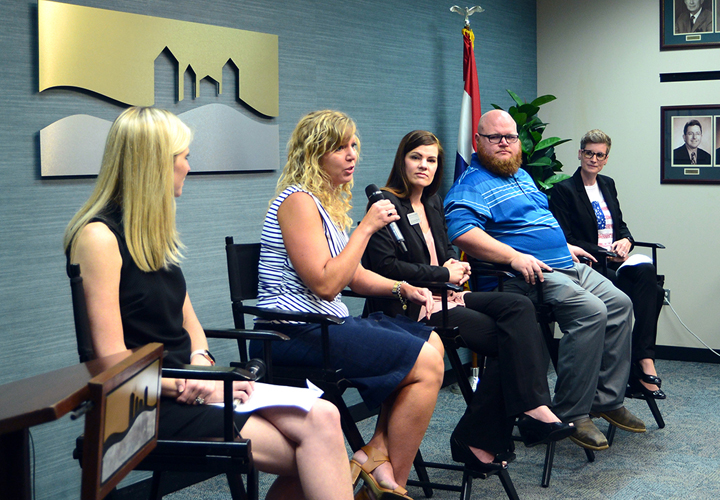 When Brandon Jones was hired by SRC at age 19, he was just out of high school. Twelve years later, he’s still with the company as a product engineer for SRC Electrical – and he’s in the middle of getting his master’s degree.

Neither is a coincidence. The company has a tuition reimbursement program, and Jones has used the opportunity to further his education in ways he may not have initially thought possible.

“It’s huge for me personally that they want to invest in me to help me become what I want to become,” Jones says. “It would be unfair to say that I haven’t looked around to see what I’m worth, but it would take a lot to make me want to jump ship – and if it’s wasn’t for those opportunities (provided by SRC), I wouldn’t have been hooked.”

Jones was one of four panelists at a July 12 event, the second in the Chamber’s Workforce Event Series. The discussion focused on employers that support employee education efforts – through tuition reimbursement, professional development and company culture – and how those programs help with workforce recruitment and retention.

Creating a new path
For Kristie Forbes, tuition assistance was the path out of a $7-per-hour clerk job. “I said I can’t survive doing this,” she said. “I needed an education and some way to pay for that.”

She was lucky; her employer at the time had a tuition reimbursement program. Four years of night classes at OTC got her an accounting degree with no student debt. And after completing her work requirement with the company, she was accepted into Missouri State University’s College of Business Administration to get her bachelor’s degree. “But if I hadn’t had that $7 an hour clerk job with the tuition reimbursement offer, I don’t know where I’d be,” she adds.

Now, she is the senior financial analyst with Jordan Valley Community Health Center – an organization that she says is in growth mode and, not coincidentally, exploring education support programs for its employees. “We need to continue to build people within the organization, so any employee development program will bring a huge benefit,” she added.

The benefit for employers
Whether organizations are explicitly in “growth mode” or simply looking for ways to plan for their future viability, employee recruitment and retention are at the top of the list of needs … and encouraging employee education can be a valuable tool in both efforts.

“We’re all faced with an aging workforce, so we have to look for ways to develop leaders for tomorrow,” said Joselyn Baldner, executive vice president and chief retail officer with Central Bank of the Ozarks. She said that was the driving force behind creating a two-year leadership development program at her bank, modeled on Leadership Springfield. “Year 1 is about how each area contributes to the bank, and Year 2 is about leadership development. The hope is that they develop into leaders for the bank.”

That program is an example of how “employee development” can stretch beyond traditional tuition reimbursement programs. For Jones of SRC Electrical, it’s all about giving people the tools to succeed.

“Many people have ideas, but take someone who would be a production worker and give them what they need to really thrive,” he said. “Sometimes they have the ‘want to,’ but they need help to get to that point.”

A nontraditional approach
And what about companies who may want to help their employees with education attainment but think the traditional bachelor’s degree program is too rigid or doesn’t fit their employee’s job?

Amy Marie Aufdembrink, the assistant director for interdisciplinary programs at MSU, says the Bachelor of General Studies program may be the answer. It allows students, with the permission and oversight of an advisor, to blend classes from two or three academic departments to customize a program of study that makes the most sense for their needs.

It’s been the right approach for Central Bank’s Baldner, who is in the middle of the program herself … despite initial misgivings. “You have to get over feeling like you’re taking a shortcut – am I taking the easy way out, not getting a business degree?” she said, noting that she had previously accumulated 80 hours at MSU when “life happened.”

“But it’s about educating people and businesses that the option is out there and it’s accepted.”