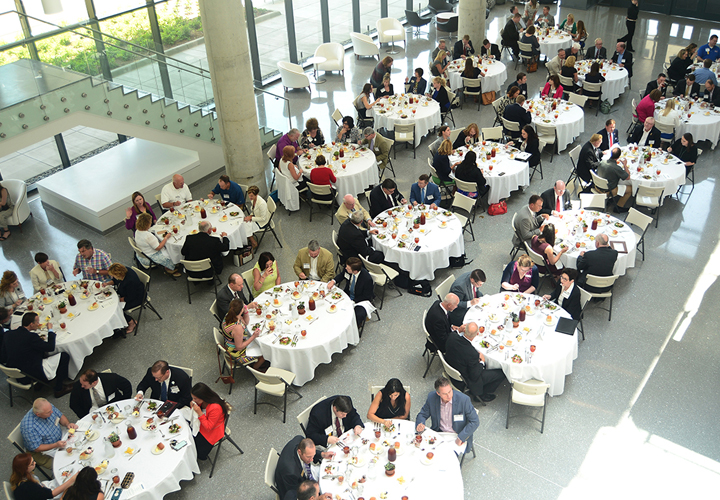 The Springfield Metro Partnership’s biennial Legislative Thank You Luncheon is a unique opportunity for members of the partnership to celebrate successes of a legislative session and thank lawmakers for the work they did in Jefferson City during the previous legislative session.

As the group gathered in the atrium of Missouri State University’s Glass Hall on June 28, the mood was overwhelmingly positive and celebratory.

Leaders of the 10 partnership members thanked legislators for a historically successful 2018 session in a number of key areas – including education, workforce development, transportation, and economic development.

Mayor Ken McClure celebrated members of the local legislative delegation, noting their commitment to public service. Referencing Senators Jay Wasson, Bob Dixon, Mike Kehoe and Ron Richard as well as Representatives Kevin Austin and Lyndall Fraker, he reflected on their time in office; some are leaving after 16 years of service.

“They represent tremendous leadership and character in our state and we should be proud of them and their work,” the mayor said. “They prioritized education and workforce development and kept the future of the state of Missouri at the forefront. While we may not all agree on every decision along the way, we can all agree that they served the state honorably and with the best of intentions.”

Gov. Mike Parson also had the chance to offer his assessment of the session, including his support for the proposed transportation infrastructure funding mechanism that will appear on the November ballot. He was frank in his assessment: fixing the state’s infrastructure will require more funding, and he encouraged those in attendance to support the state’s first fuel tax increase in more than two decades.

Parson also offered his assurance that he will continue to focus on infrastructure and workforce development in the rest of his term as governor.

Success in those areas was a theme throughout the day, as MSU President Clif Smart, Chamber president Matt Morrow, OTC Chancellor Hal Higdon and Springfield Public Schools Superintendent John Jungmann offered thanks to Budget Chairman Scott Fitzpatrick and other members of the legislature for their help in several areas. Education wins included:

The session was also historically successful in economic and workforce development, with Sen. Jay Wasson and several of his colleagues championing important pieces of legislation. Economic development progress included:

“We know there is work to do in all these areas. But we know there are competing priorities every year,” she said. “We are grateful to see support for libraries, tourism and the arts and hope to keep working together in the future.”

The day concluded with notes of optimism and continued commitment from members of the partnership.

“We still have a lot of work to do. We have to remain focused on education, workforce, transportation infrastructure – and we commit to you that we will work with you on these critical issues,” City Utilities General Manager Scott Miller told the legislators. “But there is momentum building toward next session. And when you think about the great leadership that we have right now, anything is possible.”

Visit our Photo Galleries page to see photos from the day's event.