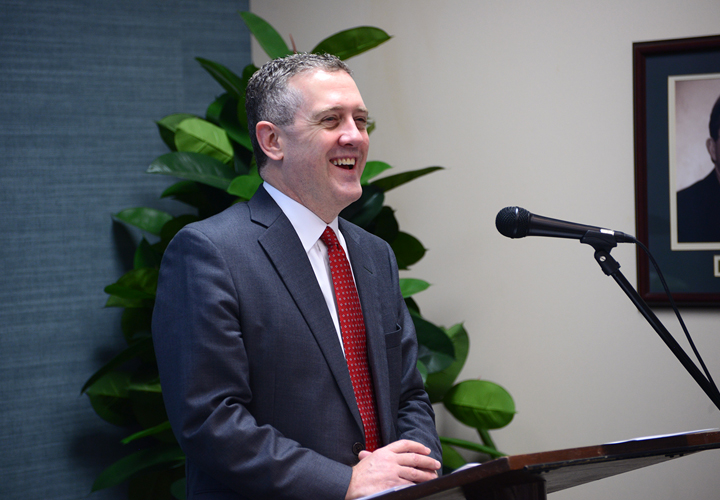 James Bullard, president and CEO of the Federal Reserve Bank of St. Louis, made a presentation to Chamber members and SBDC investors on May 11 about monetary policy and how it interacts with the economy – and his overall message was one of optimism tinged with caution.

The visit was coordinated by the SBDC, the Chamber’s economic development arm, and was part of the Fed’s statewide outreach effort. Bullard oversees the activities of the Eighth Federal Reserve District and sits on the Federal Open Market Committee (FOMC), and while in Springfield he took the opportunity to meet with members of the business community and discuss how FOMC decision making can affect the overall economy.

In his presentation to business leaders and members of the media, Bullard noted that the effective federal funds rate – the rate at which banks lend money to each other, which also indirectly influences most other interest rates – has been increasing for the last two years, especially when compared to similar rates in Europe and Japan.

In response to reports of further anticipated rate increases, he provided five reasons why he was cautious about continuing to raise the rate in the near term:

Beyond his knowledge of the economic markets, it was Bullard’s willingness to bring that knowledge directly to Springfield leaders that offered the most value.

“We’re always working to keep the Springfield area one of the economic drivers of the region, so it’s incredibly valuable to hear from one of the premier economic thought leaders in the country about what it takes to keep things moving in the right direction,” said Ryan Mooney, the Chamber’s senior vice president for economic development.