Networking with a modern twist 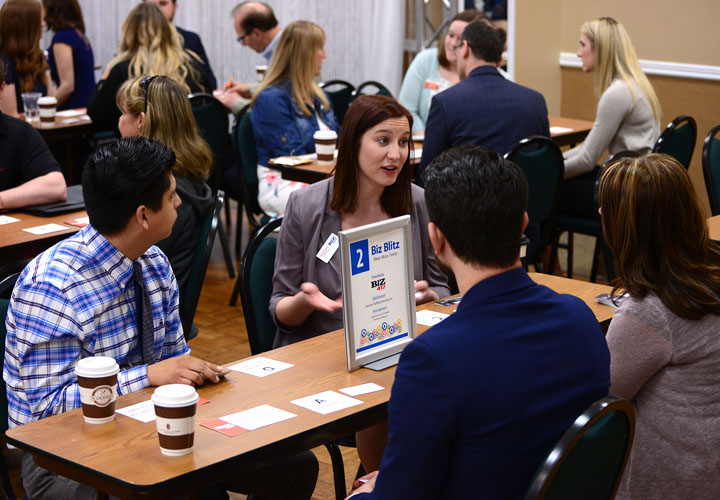 When the Chamber created its new Biz Blitz event in 2017, the idea was to offer individual members a new way to make connections. It was a sort of “speed dating” approach to networking: We provide the space and the structure, you bring your personality and energy.

The response was strong – both the spring and fall events sold out quickly last year – so bringing it back for 2018 was a no-brainer. We also decided to expand it by offering seats to a few more attendees.

Interest in the first session of 2018, held on April 24, remained strong, with 140 tickets sold to the event at the Executive Conference Center’s 910 Ballroom. And the attendees seemed enthused as well.

“I enjoyed getting to meet other professionals from the area and learn more about their businesses,” said Fawn Rechkemmer. Fawn is owner of Itty Bitty City, which recently joined the Chamber, and she said she was pleasantly surprised by her first Chamber event. “I was surprised at how many people were there – I assumed that I wouldn't know anyone since I'm new to the Chamber, but I ran into several people I already knew.”

The event also made a big impact for experienced Chamber members as well, including Diana Tyndall, the marketing and sponsorship coordinator for the Springfield-Greene County Park Board. Diana says she used the event to make connections with lots of new people and talk about park sponsorship opportunities and upcoming community events in the parks.

“Professionally, I made some new contacts that were much better than just cold-calling businesses, and got a chance to practice my elevator pitch,” she said. “Personally, I found a great contact to help tutor our boys for the summer! It was the best of both worlds.”