Assessment of federal government from a legislative leader 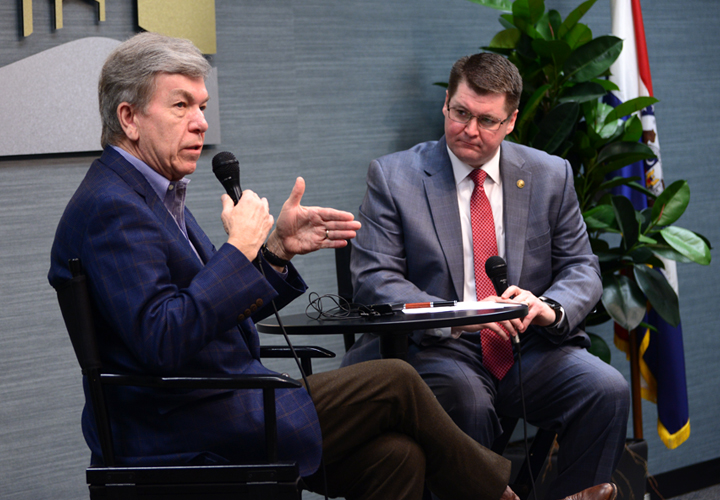 The first installment of the Chamber’s 2018 Public Policy Speaker Series brought one of the most influential, and yet most familiar, Missourians back to Springfield on March 26: U.S. Sen. Roy Blunt.

Blunt’s long career has taken him from the Greene County Clerk’s office to the president’s chair at Southwest Baptist University and then on to roles as Missouri’s Secretary of State, minority whip in the U.S. House of Representatives and now one of the state’s two U. S. Senators. He took time to visit Springfield and offer a look at the current legislative environment, how the state of governing has changed in recent years at the federal level, and what he hopes he and his colleagues can accomplish in the coming months.

Transportation, trade & taxes
Sen. Blunt emphasized the importance of finding a way to fund transportation and infrastructure issues, especially in Missouri; he added that he had hoped that would have been addressed more in 2017.

“If you look at a highway map of America, or a river map, or a railroad map, focus where they logically come together and you’re looking at our backyard,” he told the nearly 100 in attendance. “Our single pre-eminent advantage as Missourians is location. But location only matters if you make the most of it.”

He added that while he continues to push for federal solutions to infrastructure, including funding and ways to expedite the permitting process for new projects, any successful answer to the transportation funding issue will have to include state and local components as well.

The senator said he was worried about recent changes to federal trade policy. He said that the U.S. benefits from open markets and instead should focus on taking a more aggressive approach to following up on trade agreements that are already in place. “Most of the protections we need are in the agreements, but we haven’t for whatever reason done a very good job of enforcing those protections,” he said. “We haven’t focused enough on the ‘fair trade’ part of ‘free trade.’”

One area Blunt was happy with was the recent rewrite of the tax code, which he sees as a significant win for individuals and businesses. He said most people will be positively impacted by the new rules: A married couple filing jointly making $73,000 a year will take home $2,000 more per year, while a single mother of one making $41,000 will pay 30% less in taxes and take home $110 more each month.

Governing today
But one of the biggest changes, Blunt said, is the change in mindset, both among citizens in how they think of government and among those who have run for office in recent years. He said that there is more polarization and less willingness to cooperate with each other than there used to be, though it’s not as bad as popular opinion or social media coverage might lead you to believe.

“Especially in the Senate, almost everything takes some level of bipartisan cooperation, and relationships matter more,” he said. “There aren’t enough people that you can burn that many bridges and hope to be a functional member of the Senate. It’s functional, but not as much as it should be.”

What has really changed, Blunt said, is the approach of many who are running for higher office. He said he really began to notice it about eight or nine years ago, with “substantial numbers” of candidates saying that if elected, they wouldn’t be happy with anything less than exactly what they promised during their campaigns.

“I wonder how those people function in their own house?” he asked with a laugh. “That doesn’t work anywhere else; it’s the antithesis of democracy. In a democracy, you’re almost guaranteed never to get exactly what you want.”

That led Blunt to offer some advice to those in attendance, both as individuals and to Springfield as a whole: No situation is perfect and everything is a work in progress, so focus on the positives.