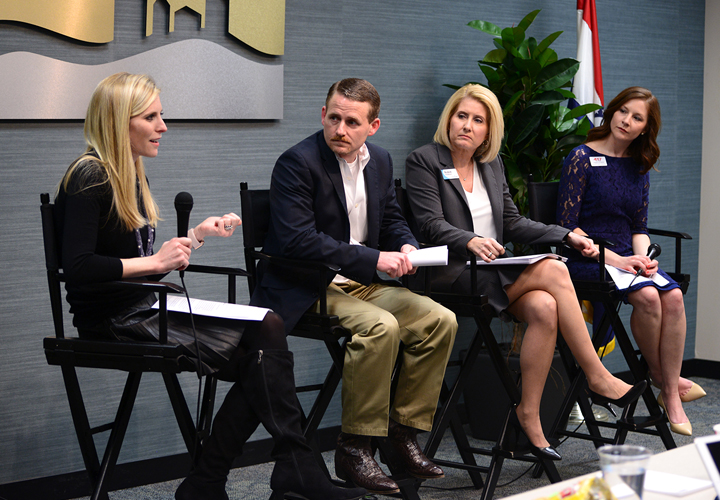 The struggle for today’s businesses to grow and prosper often centers around finding and keeping the right mix of talented, motivated employees. And with unemployment rates at historic lows, the biggest key to recruiting and retaining those employees can often be creating the right workplace culture.

Chamber staff meets with 180+ companies each year to ask about barriers to growth. In those meetings, we continually hear that workforce is the biggest barrier. More and more companies are beginning to talk about workplace culture as both a talent retention and a talent attraction tool.

The Chamber created the Workforce Event Series for 2018 to talk about many of these issues, and the first event in the series – held on March 22 – brought together a panel of local leaders to focus on workplace culture.

Bass Pro Shops Head of Talent Acquisition and Director of Community Affairs Catherine Bass, who serves as the 2018 vice chairman of workforce development for the Chamber Board of Directors, moderated the panel and asked them how they have worked to build positive culture in their workplace and use that to attract and retain the best employees.

Build it, live it
“In a perfect world, culture comes from a proactive vision from leadership,” said panelist Robin Robeson, chief operating officer with Guaranty Bank. “Unfortunately, that’s not what usually happens. The culture usually just takes on whatever vision the leader has at the time; it’s not always intentional.”

Bass and all the panelists – Robeson, Logan Aguirre of 417 Magazine, and Tom Douglas of JMARK Business Solutions – said building the culture you want in your business means being intentional about deciding what your core values are as a company. They also agreed that the process starts with leadership.

“You have to be the champion. If you’re negative, it won’t work,” Douglas told the more than 60 attendees. “You have to live it, and you have to celebrate others who do. First, you define the culture – call people out when they get off the rails – and then live it in every interaction.”

Showing appreciation
A key component of successful culture building is letting employees know they are involved and appreciated. Aguirre noted 417’s process of offering multiple ways for people to bring forward ideas or frustrations, whether it be through monthly impact meetings, quarterly check-ins with directors, or monthly meetings of the management team that anyone can sit in on to offer their input.

For Guaranty Bank, the process of gathering input begins from Day One – literally.

Robeson said that during the onboarding process, she tells all new hires the apocryphal story of the “orange extension cord,” when a new employee noticed an orange extension cord stretched across a company lobby and asked multiple co-workers about its purpose, only to be told they didn’t even notice it was there … because it had been there so long.

“I tell them they have a unique opportunity to make our company better. Ask the question: Do we have any orange extension cords?” she said. “I ask them to commit that if they see anything that doesn’t make sense or they don’t understand, ask. And be open that if someone comes to you later and asks you, don’t be defensive. Remember that you were in their position once.”

Recruiting on culture
With such high demand for skilled talent, a company that is focused on building positive culture can create an advantage for itself.

“The demand in our industry is substantial for engineering talent – the unemployment rate in our world is less than 2%, so we had to focus on having the right levers in place to keep people in our organization,” Douglas said. “And if the culture is strong enough, reinforcement comes from peers, and it’s received as constructive as opposed to being critical.”

Aguirre, whose organization went to the added step of writing a culture handbook laying out its philosophical goals, added that when the culture is baked in, employees can tell the story themselves. “Having the team tell the story makes it easier,” she said. “Their peers are an audience we want to recruit from.”

While there are many different ways to create a positive culture, and many different looks that culture can take, Robeson noted that its importance cannot be overstated.

“Being purposeful about culture is as important as the decisions you make about pricing and products and service,” she told the crowd. “It can’t be an afterthought. It has to be in the forefront. The culture drives everything else.”