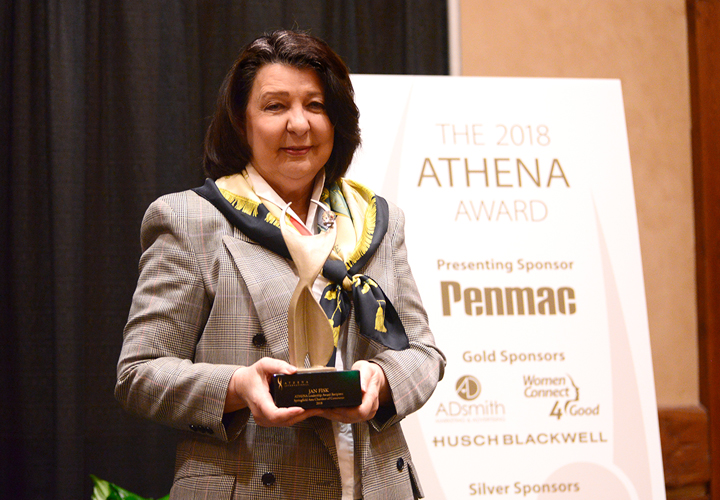 When the Chamber decided to bring back the ATHENA Award for 2018, we opened the nomination process to our members and to the general public. Roughly 20 nominees were on the list, and while they were all deserving names, there’s no arguing with the judges’ selection of the 2018 honoree.

Springfield Mayor Pro Tem Jan Fisk received the ATHENA Award at the March 8 luncheon event, held at the White River Conference Center next to Bass Pro Shops and the Wonders of Wildlife Museum and Aquarium. Nearly 300 members of the community showed up to offer their congratulations and support for the honoree and for women’s leadership in the business world.

That support was exemplified by the afternoon’s keynote speaker, Evangel University President Dr. Carol Taylor. Taylor, the university’s first female president, officially took the reins of the school in 2014 and led the university through its first few months after consolidation with Central Bible College the Assemblies of God Theological Seminary.

In her presentation, Dr. Taylor applauded several groups in the room—the women who took the risk to make strides in their fields, the companies that supported them, and the men who promoted and celebrated their efforts. She offered stories of groundbreaking women in several fields, from education to music to mountain climbing.

But Dr. Taylor offered her greatest praises for the day’s guest of honor, to whom she offered the laudatory gestures found in the Book of Proverbs: “Give her everything she deserves! Festoon her life with praises!”

And after an introduction from Britton Jobe, Fisk’s longtime friend and one of the people who nominated her for the award, it was time for the honoree herself to take the stage.

“From the time I came to Springfield in 1973, I wanted to be a part of this community,” she told the crowd. She talked about how she joined the Junior League, which taught her leadership skills, and eventually was encouraged to get involved in civic leadership. She offered specific thanks to the two mayors with whom she has served on Springfield City Council: Bob Stephens and Ken McClure.

“Both have offered guidance and support, and they’ve even called me for advice – imagine them calling me for advice!” she said. “But thank you for all your words of encouragement, and for appointing me to sit on some of the most important committees and boards of City Council.”

And after thanking both of her families – her home family, including husband Howard and her children, and her Fisk Limousine “family” – she offered a closing piece of wisdom.

“My advice to you today is to find your mentor,” she said, pointing to the two in her life: longtime educator, community leader and 2003 Springfieldian Roseann Bentley, and philanthropist and chairman of Ozarks Coca-Cola/Dr Pepper Bottling Company Sally Hargis. “They are friends, and how lucky I am to have them as neighbors.”