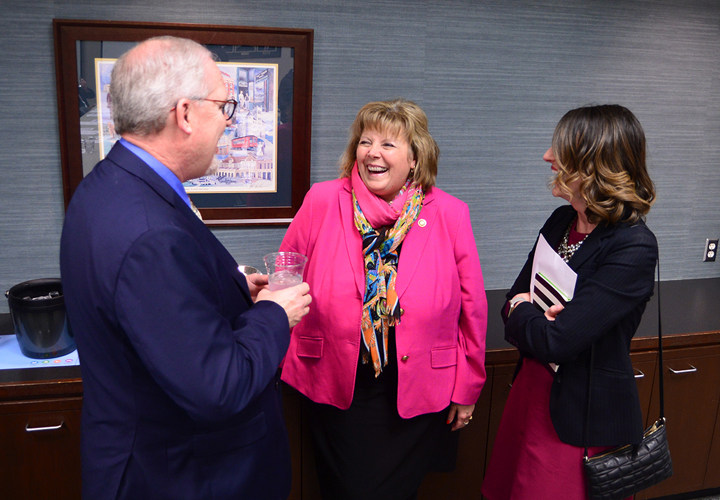 Sandy Crawford took a unique path to her seat in the Missouri Senate.

The senator representing the state’s 28th district, which covers Benton, Cedar, Dallas, Hickory, Laclede, Pettis, Polk, St. Clair counties, won her seat in a special election last August after having served in the state House since 2011.

The move to the Senate has been a change for Crawford, as she told the Chamber’s Governmental Relations Committee when she visited on March 20 during the General Assembly’s spring break. “It’s been a real eye-opener for me,” she told the 40+ attendees. “Things move a lot slower over there, procedures are a lot different.”

Sen. Crawford also shared that she is the state’s 10th female Republican Senator, and just the 28th female Senator in Missouri’s history. And as one of just 34 state senators representing Missouri’s six million citizens, she said she does not take the responsibility of senator lightly.

Crawford sits on four committees in the Senate – Insurance & Banking, Agriculture, Local Government & Elections, and the Veterans & Military Affairs committee – and has filed 19 bills this session, including a tort reform bill that would cap outside counsel fees for the Attorney General’s office and legislation that would regulate labeling for lab-grown “meat” in the state.

But she says most of the work remains to be done between now and the end of the session in mid-May. Among the topics Crawford discussed that have yet to make it out of the Senate this session:

And, of course, there’s the state budget, which the House likely will mark up near the end of March to send over to the Senate for consideration

There is a good amount of work left this year, but Sen. Crawford said that’s not unusual in Jefferson City and that she’s pleased with the amount of progress made so far. “About 90 percent of legislation gets passed in the last two weeks of the session,” she said. “It’s a pretty frantic time up there.”

Crawford also shared the importance of business leaders working with the state’s elected officials to ensure the enactment of good public policy. “I can’t tell you how important it is for you to come to the capitol and talk to your elected officials,” she told the group. “Look them in the eyes and say, ‘This is my business and this is how this legislation would affect my business or industry.’”