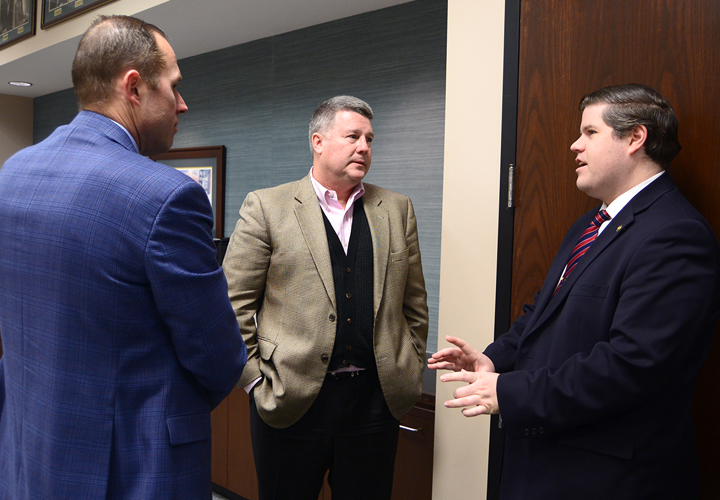 The Chamber’s Governmental Relations Committee hosted its first lawmaker of the 2018 session on February 2, when Rep. Curtis Trent returned from Jefferson City to offer an update on progress made thus far this year.

Trent serves several key roles in the Missouri House this session, as he sits on the House Budget Committee, the Higher Education Committee and the Subcommittee on Appropriations that includes economic development.

He told the group in attendance that while some initial progress has been made on some bills that almost passed in the last session, much of the work for 2018 remains ahead. The theme of the session, he said, will be jobs and economic development.

“Economic development is going to be important to the state,” he said. “If we want to pay for our priorities, the only way to do it is through growing our economy.”

He said all ideas are on the table—streamlined sales tax, a review of existing tax deductions, updates to existing fees, and cuts to personal and corporate income tax rates—adding that any solution would have to meet two criteria: It would need to be revenue neutral and offer an avenue to increased funding for transportation infrastructure.

Rep. Trent also acknowledged that the state’s budget situation remains difficult, but he stressed that there is broad agreement that the cuts made last year to higher education funding need to be restored. “We need to have a robust higher education system to act as a pipeline for people to enter the workforce with the proper training,” he said.

That tied in with his desire to continue looking for ways to fund state-level workforce development programs, which he said are critical in helping to get students from schools to jobs and getting the long-term unemployed back into the workforce—a critical need because of the historically low unemployment rate.

In line with Chamber priorities, members inquired about issues ranging from workforce training programs to how infrastructure will be addressed and more. Members also voiced concern with the impact of any proposed tax reform on the state’s long term fiscal stability.