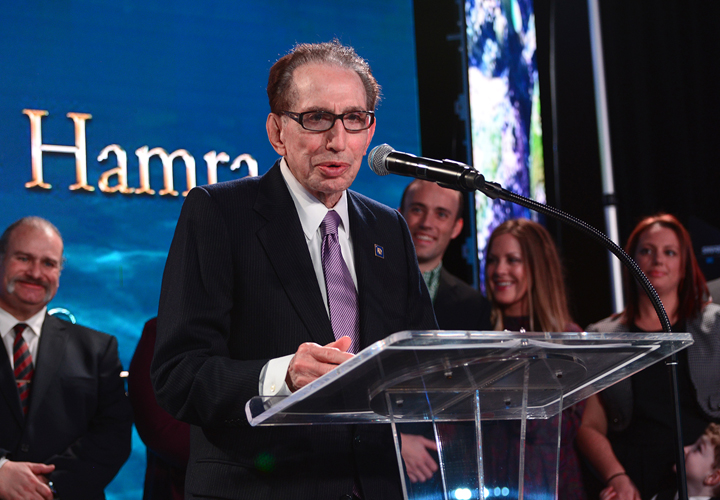 A long history of community service, business success and dedication to the betterment of Springfield come to mind when thinking of Sam Hamra. Those accomplishments and more were celebrated on Friday, January 26, when the Springfield Area Chamber of Commerce named Hamra the recipient of the 2018 Springfieldian award.

The surprise announcement was the culmination of the Chamber’s Annual Meeting, its largest annual event, held at University Plaza Hotel & Convention Center. The Springfieldian is the Chamber’s most coveted honor, given each year to an individual who exemplifies outstanding community service, excellence in his or her field and dedication to improving the quality of life for Springfield and its citizens. (Scroll to the bottom of this story to see the video that unveiled the surprise announcement!)

Once he completed business school at the University of Missouri, Hamra’s career began in the military, where he served in the U.S. Army in Germany before receiving his honorable discharge as a First Lieutenant. He later served as U.S. Civilian Aide to the Secretary of the Army for the Western District of Missouri from 1997-2003 and was instrumental in spearheading the expansion of Fort Leonard Wood.

He has more than five decades of experience practicing law in Springfield; he combined his law knowledge with his desire to help those less fortunate to found what is now Legal Services of Southwest Missouri, helping provide legal services to thousands who couldn’t otherwise afford them. The center’s new facility is named the Sam F. Hamra Center for Justice in his honor.

Hamra also is a successful businessman. Hamra Enterprises, which he and his family founded in 1975, now owns and operates 91 Wendy’s restaurants in three states, as well as 57 Panera restaurants in the Chicago and Boston markets and nine Noodles & Company restaurants in Missouri and Illinois.

Hamra also strives to give back to the community and his colleagues. His company maintains the Hamra’s Employees Reaching Out (HERO) Fund, which has raised more than $1 million dollars and was part of what earned Hamra Enterprises the 2017 Philanthropic Business of the Year honors from Springfield Business Journal. That philosophy of giving back is in line with his vision for life. When accepting the award, he quoted friend and fellow philanthropist Danny Thomas, founder of St. Jude Children’s Research Hospital: “Success has nothing to do with what you gain in life or accomplish for yourself. It’s what you do for others.”

Recognition is nothing new for Sam. Hamra Enterprises was the recipient of the Wendy’s International “Dave Thomas Founders Award” in 2009, given to the outstanding franchisee of the year. In 2003, Sam received the University of Missouri Alumni Distinguished Service Award, the highest honor the university awards to an alumnus annually. He also has received the Silver Medallion Award from Missouri State University in 2009, the 2010 OTC Excellence in Business Award and SBJ’s Lifetime Achievement in Business Award in 2010.

But Hamra said he was truly touched by the idea of being honored for his contributions for the city he and his wife, June, adopted as their own some six decades ago. “Those that I’ve been able to touch – I owe you greatly for giving me the opportunity to serve you,” he told those in attendance. “This is truly one of the highest honors I’ve ever received.”