A day of advocacy in the state Capitol 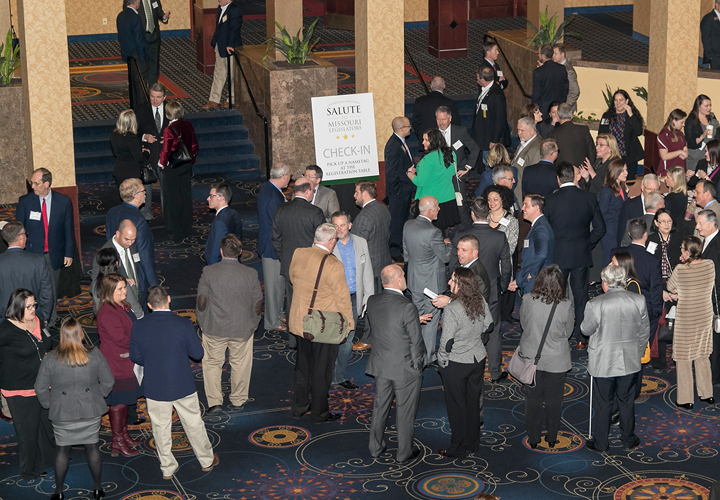 While you are hard at work in your business each day, the Chamber carries your concerns, challenges, and priorities to elected officials and decision makers each week during the Missouri General Assembly’s legislative session. The region also had the chance to communicate more directly with legislators and officeholders from across the state when our Springfield Metro Partners and many local volunteers traveled to Jefferson City on January 24 for Advocacy Day and the Springfield Regional Salute to Legislators reception.

Throughout the day, members of the Springfield Metro Partnership (see inset box for list of partners) visited the offices of members of the legislature to discuss regional priorities for 2018. Issues that are top of mind for the group include fiscal responsibility and stability for the state, transportation infrastructure and the importance of investing in education and workforce development.

Members of the partnership including Chamber President Matt Morrow and Board Chairman Doug Neff met with the Springfield local legislative delegation as well as House and Senate leadership, including House Speaker Pro Tem and Speaker-Elect Representative Elijah Haahr, who represents the 134th district in the Springfield area. Metro partners also had the chance to share priorities and talk about economic development and the importance of growing our workforce with members of Gov. Greitens’ staff, Lt. Gov. Mike Parson, State Treasurer Eric Schmitt, House Budget Committee Chairman Scott Fitzpatrick and Director of Economic Development Rob Dixon.

In those meetings, there was strong support for the regional priorities and general agreement on where we need to look to move the state forward, including making investments in order to grow our workforce. Speaker Todd Richardson noted that “we could have the best tax, labor and legal climate in the country, but if a company can’t get the workforce they need, they won’t make the decision to choose Missouri.”

This sentiment was echoed by Speaker-Elect Haahr who will preside over the House in 2019. “Some of the keys to the future of our state are transportation, energy policy and workforce development,” he said.

Advocacy from the Springfield region continued that evening at the partnership’s Salute to Legislators reception. Now in its 33rd year, the annual Salute reception showcases the Springfield/Branson region before a statewide audience of lawmakers and executive branch officials. It is also an opportunity for our region’s business, community, and education leaders to interact with state officials and present a unified message on community-wide issues of mutual legislative interest. This year, several hundred people from the Springfield region traveled to Jefferson City for the event, which is also very well-attended by legislators and officials from throughout the state.

Sen. Jay Wasson said he believes the reception is an important opportunity for those in leadership and legislators from other areas of the state to hear more directly from the Springfield region. “When all the Springfield area folks come up, it’s not just me that’s saying, ‘This is what’s going on in the region that’s important,’” Wasson said. “It keeps our issues out in front and on people’s minds.”