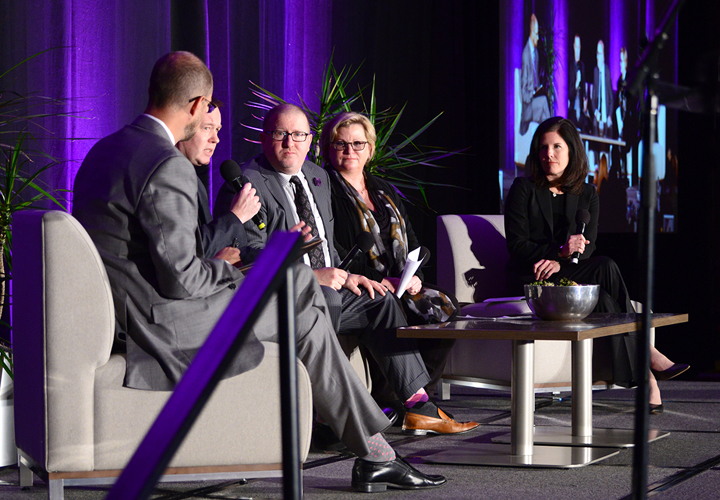 The Springfield-area manufacturing industry is positioned to make continued advances in technology, wage growth and employee safety – if the community continues to make investments in programs that support workforce development and retention.

That was the message from four local industry leaders during the Dec. 8 Manufacturing Outlook event at University Plaza Hotel & Convention Center. The event was the final in the yearlong Outlook Series presented by the Chamber’s economic development arm, the Springfield Business Development Corporation.

The four panelists – Jenny Carr of L&W Industries, Mark Hillenburg of DMP, Jena Holtberg-Benge of John Deere Reman and Mark Thomas of French’s Springfield – told more than 300 in attendance that the manufacturing industry remains strong in our area.

The numbers bear out their optimism: Manufacturers employ more than 22,000 people in jobs with higher average wages than non-manufacturing jobs, and the sector has experienced 22% job growth since the recession ended. Recent years have seen several noteworthy projects on the manufacturing landscape in our area, from major capital investments by Kraft Heinz and 3M to the addition of Vital Farms and new development at  Partnership Industrial Center West.

The panelists said one of the biggest trends they see, both in their individual companies and in the industry overall, is the continued move toward automation. “We depend on high-speed production,” Thomas said, noting that French’s Springfield facility produces 26 million cases of product annually. “We’re trying to eliminate the more painful, dangerous and laborious jobs through automation to free those people to do other things in our company.”

All the employers emphasized, though, that automation doesn’t mean less need for workers. In fact, the need for workers continues to grow – in areas like engineering, design and machine maintenance. That’s a big part of the reason Carr noted that average wages in the manufacturing sector exceed the overall average in the Springfield area and continue to climb. “It’s really all about automating the unsafe jobs and training people to do the more skilled, better-paying jobs,” she added.

But while there are many new opportunities to be had in the industry, all four panelists agreed that there simply aren’t enough people to fill the needs.

It’s an issue the Chamber has been actively addressing in recent years through the addition  of workforce development as one of our four strategic areas of focus. The Chamber is involved in and supports numerous programs aiming at talent attraction, retention and development, such as the joint engineering program between Missouri State University and Missouri University of Science & Technology, and numerous new on-the-job training programs in the area.

Career exploration program GO CAPS and its teacher externship component is one workforce effortthe panelists pointed to that helps students become interested in manufacturing – an especially critical task considering unemployment rates are at a 17-year low.

“Taking those students and teachers and showing them the types of jobs that are available and the new skills we need, like engineering, is important,” Carr said. “And we can get them enthused about us.”

The other side of that coin is to grow the labor force by encouraging people to relocate to Springfield. They noted that the amenities the city has, from its parks and schools to its central location, make it an attractive destination if the community will take the time to embrace those assets.

Holtberg-Benge summed it up best: “Keep investing in Springfield!”