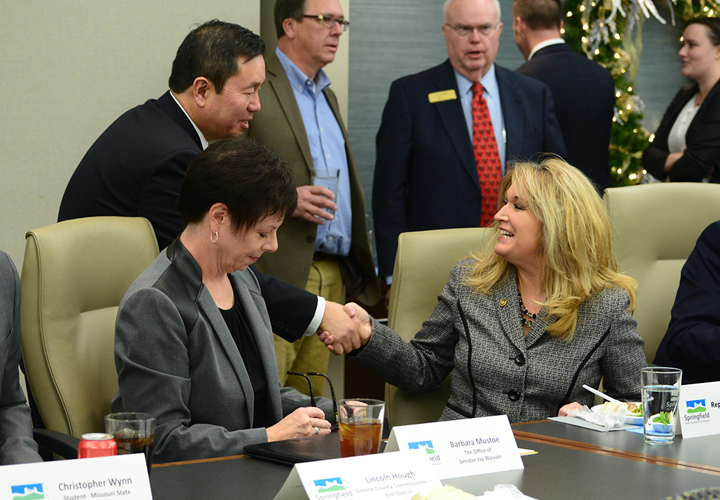 Continuing in its role as a Trusted Convener on important issues, the Chamber brought together leaders from the University of Missouri, Missouri State University, CoxHealth, and Mercy on Nov. 30 to talk with members of our state delegation about the importance of funding for several ongoing partnership programs that produce high-wage jobs in the state.

Two programs in need of ongoing state funding  to remain successful were the Springfield Clinical Campus, a partnership between Mizzou, MSU, Cox, and Mercy, and the Springfield engineering program between MSU and Missouri University of Science and Technology .

Both programs are unique in that they bring together organizations that usually compete for business and talent to work together, and both programs have the potential to be huge boons in addressing the ongoing workforce development issues facing the health care and engineering sectors.

And the two programs have another, more unfortunate, aspect in common: Both have had funding challenges in the legislature and were ultimately defunded due to the governor’s withholdings during the 2017 legislative session.

MU System President Dr. Mun Choi and Dr. Patrick Delafontaine, dean of the MU School of Medicine, were in Springfield for the event, and Delafontaine talked about the grim shortage of physicians facing the medical field. The Association of American Medical Colleges estimates that there will be a shortage of 90,000 physicians in the next two years, with the largest deficits in rural areas and among primary care physicians. He also noted that 90% of rural counties in Missouri lack adequate physician coverage.

But, he added, Mizzou’s med school and the Springfield Clinical Campus are working to address the problem. More than 40% of all Mizzou med school graduates stay in the state to work after graduation, and, if state funds are appropriated, the Springfield campus will have 64 third- or fourth-year students by 2020.

Both Cox and Mercy echoed the need for highly trained professionals. CoxHealth President and CEO Steve Edwards, for example, noted that Cox has a 6% vacancy rate, translating to roughly 700 open jobs. “We have two first-class health systems here in Springfield, and this partnership allows students to experience all of southwest Missouri and gives them the ability to impact the economy here,” said Mercy Chief Operating Officer Brent Hubbard. “Funding is critical to making that happen.”

The partners also discussed the cost savings that a partnership such as this can create. The development of a brand new medical school at a university can carry a billion-dollar price tag, while this model can produce doctors at a cost to the state of $10 million annually.

Workforce needs are also critical on the engineering side, where MSU and MO S&T’s joint engineering program has been working to address the issue for nearly a decade. The program, which started in fall 2008, has graduated more than 180 students since the first class completed the program in 2012, and most have stayed in southwest Missouri according to Dr. Tamara Jahnke, dean of MSU’s College of Natural and Applied Sciences.

For their part, state representatives on hand were eager to find ways to support the programs. Rep. Scott Fitzpatrick (R-Shell Knob) said finding funding for the medical program is vital, as long as there are residency programs available for program graduates. Both Edwards and Delafontaine said that while federal funding is an issue for residencies, the medical systems and university are each looking at self-funding residency programs because of the continued competition for professionals in those areas.