Drawn to office by history and a desire to serve 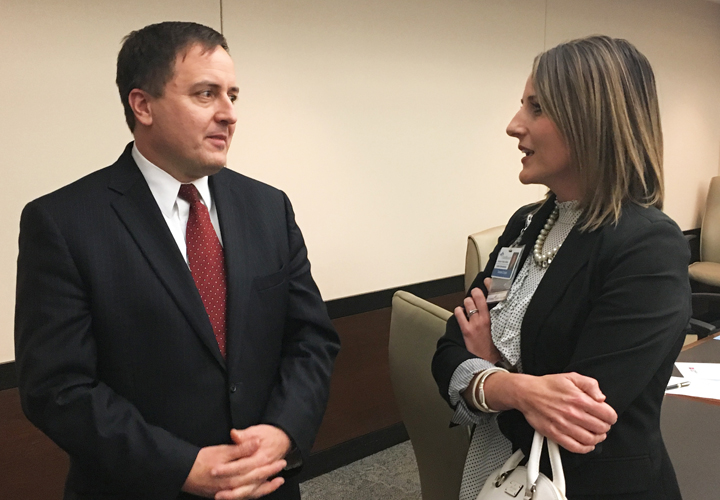 It’s easy to assume that Jay Ashcroft was, as he puts it, “infected with the idea of public service at a young age.” With a last name and family pedigree as recognizable as any in Missouri political history, a move directly into the political arena would be only natural.

But when he visited Springfield for the final installment of the Chamber’s 2017 Public Policy Speaker Series on November 15, the current Missouri Secretary of State said that he initially turned away from politics—and even from the law field chosen by his father, former Missouri Governor and U.S. Attorney General John Ashcroft. He says he was eventually drawn back to the world of law and politics by a desire to make a difference.

“There is a need for people from all sides to get involved with government,” Ashcroft said. “Regardless of which party or side you come from—Republican, Democrat, Libertarian, Green Party—there’s a need for people to come together, to work on things, and do them well. Let’s work together to do things right.”

Ashcroft’s office serves many functions; Jim Meadows of series sponsor Lathrop Gage called the Secretary of State’s office one of the most misunderstood but most important state offices for business. Its most visible function is overseeing elections, though Ashcroft says local election authorities “do 90% of the work of holding elections.”

Another area of work for the office is business services, including acting as the place businesses go to file for state approval. “The secretary of state should be the No. 2 ambassador for business in the state. We need to work with the governor to create a business environment conducive to growth,” he said, noting that his office is working on items such as updating its computer systems and promoting legislation to allow for remote electronic notarization. “What can we do to help the wheels of commerce work more smoothly and remove friction?”

However, much of his time is consumed with responses to initiative petitions, which are at record levels. As of the 15th, 303 had been filed since November 2016, obliterating the previous record of 220 in a 12-month period. Ashcroft said he feels people absolutely need the ability to petition as a safety valve if they feel government is not responsive to their needs. But he feels the process is out of control.

“The Missouri Constitution is 10 times as long as the U.S. Constitution in terms of word count. And if you look at the 300+ initiative petitions filed, 98% of them are constitutional changes,” he said. “I think it’s scary.” He added that his office is working to propose legislative language that would attempt to weed out nuisance petitions while still preserving the rights of the individual to petition for change.

A proposal like that would require significant explanation for voters … and Ashcroft is up for the task. He says getting out to talk to constituents directly is crucial to governing, and by the end of November he will have visited every county to discuss various issues related to his office.

“Elected officials love to be on TV, but the public can’t ask you a question when you’re on TV – the best they can do is mute you,” he said. “When there is change occurring, the key is to get out there to talk to people about what’s going on … and to be able to listen.”