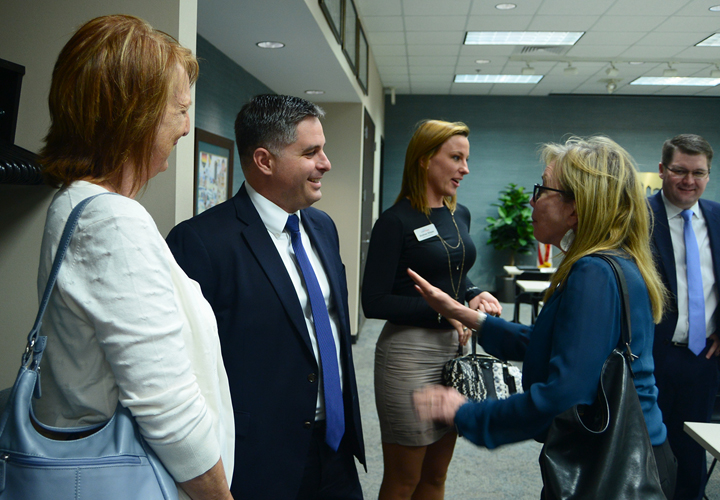 In our continued effort to serve as a Trusted Convener and an Inclusive Engager for our members, the Chamber was busy in October bringing Missouri leaders to Springfield to meet with members and offer a look at what is happening at the state level.

Here’s a look at some of the highlights from recent events.

Director Rob Dixon visits the Chamber in his new role
Rob Dixon is well-known to anyone familiar with the Chamber or the Springfield business community, having served for several years with the Chamber as a member of the economic development team and the executive vice president. Now he is taking his local experience to Jefferson City, serving as the governor’s appointee as acting director of the Missouri Department of Economic Development.

Dixon visited the Chamber on Oct. 26 in a joint meeting of SBDC investors and the Governmental Relations Committee to provide an update about what’s happening in statewide economic development and talk about the No Mo Red Tape initiative to remove hurdles for businesses.

“We’re trying to make it easier to do business in Missouri,” he said. “One of my favorite things to talk about is how to reduce bureaucracy.”

He talked at length about the importance of business growth to the state’s future, and many of his points mirror the Chamber’s stance. The key to growth, he said, is in helping companies that are already here to add jobs, noting that 80 percent of new jobs will come from existing businesses.

He also talked about the importance of supporting workforce development—a cause near and dear to Dixon, who previously served as head of the Missouri Community College Association.

The key to success, he said, is innovation: “How do we make sure education providers are preparing students for jobs that haven’t even been invented yet?” he asked. Joint efforts with the Department of Higher Education and Department of Elementary & Secondary Education to address training and skills gaps will be key, Dixon added, pointing as an example to the Skilled Workforce Missouri Initiative—a statewide one-stop shop for businesses looking to develop training programs.

Efforts like these can be successful, he added, if state, local and business leaders step forward and make big decisions: “There are amazing things happening in Missouri – we need to be bold and be willing to tell our story.”

State auditor touts bipartisanship and independence
Nicole Galloway didn’t envision herself as a public official. But as she told the guests at the Chamber on Oct. 10 during the Public Policy Speaker Series, when your parents make you pay taxes on your allowance starting at age nine, you quickly learn about the value of a dollar … and become aware of where every dollar goes.

She has put that inquisitive nature to good use as Missouri’s state auditor, a role she has held since being appointed in April 2015. She brings experience as a CPA and certified fraud examiner, along with time as treasurer of Boone County. In just over two years on the job, her office has identified $130 million in waste and abuse and conducted audits that led to more than 30 criminal counts against public officials.

“Government exists to serve its people, not itself,” she said. “My job is to be the accountability measure to ensure that your taxpayer dollars are being used wisely.”

She also noted the importance of funding for higher education (a recent audit of funding and affordability of higher education in Missouri put the state 43rd in the nation). She said that tracking both the revenue and spending sides of the education revenue equation is key to keeping education affordable and maintaining options for workforce development.

“We need a skilled, trained, educated workforce to fill your needs as a business, and their education is critical to that mission,” Galloway said, adding that she believes drawing ideas from both sides of the aisle is the best way to move forward. “We need a good business environment here in Missouri to attract jobs, retain jobs and employ people. We may have different ideas about ways to get there, and that’s where the policy discussions occur. But that should be everyone’s goal.”

The Treasurer’s office is looking for ways to update outdated laws that prohibit businesses from attaining this type of loan. Treasurer Schmitt noted that Springfield is actively engaged in the Linked Deposit pogrom and sought feedback on ways to improve it. “We want it to reflect the changing dynamics on our economy and know how we make it more relevant,” Schmitt said.