Honoring those who protect us every day 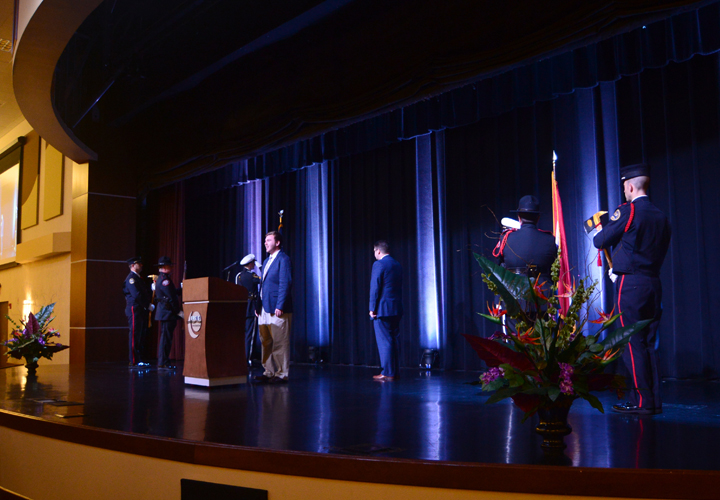 Most of us hope that we never need to call on the services of one of our community’s many first responders. But whether it’s the police, sheriffs, firefighters or medical professionals that answer calls for help, they play a critical role in keeping us safe every day.

The Chamber was honored to pay homage to these hard-working men and women during our inaugural First Responders Appreciation breakfast on September 20 at Oasis Hotel & Convention Center. Nearly 300 were on hand, including roughly 100 first responders from numerous communities inside and outside of Greene County.

From the presentation of colors by the Honor Guard to the singing of the National Anthem and the morning’s keynote address, everyone was ready to honor the people who put their lives on the line each and every day.

The keynote speaker for the event, Abram McGull II, brought a highly impressive résumé to the stage. He serves as the Assistant U.S. Attorney for the Department of Justice in Springfield, having moved to the area from New Orleans where he served in the same capacity. He retired from the U.S. Navy as a commander in 2012 after 21 years of service, having served as a military spokesperson in Baghdad, Iraq, and he has a long list of military accomplishments including the Bronze Star Medal.

But on this day, he was ready to pay tribute to the other heroes in the room. “I know firsthand the important work that each of you do for this community,” McGull said. “That is why I’m so proud to work at your side to fight crime and preserve life.”

Several Chamber member companies also showed their support by sponsoring the event, including Presenting Sponsor CoxHealth and Gold Sponsors Convoy of Hope, Oasis and Radiophone Engineering. Radiophone President John George called it a privilege to work with first responders on a daily basis.

“In the 20 years that I’ve been involved with the business, I don’t think there’s been a single day that I’ve not had law enforcement, fire or EMS services in our office,” he said. “We really appreciate what first responders do for us each day.”

Visit our Photo Galleries page to see images from the day's event.