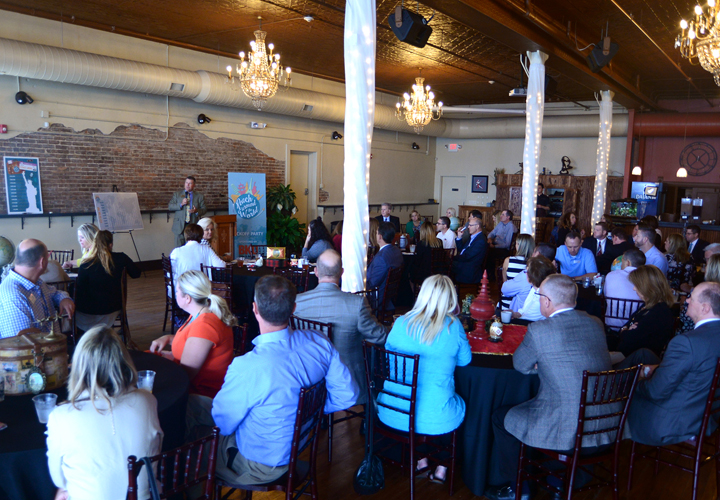 The Reach Campaign is off and running for 2017, and the second year of the Chamber’s new efforts officially launched on Sept. 14 with the kickoff event at the Savoy Ballroom.

Reach is the Chamber’s reimagined idea to offer members ways to invest in the Chamber and support the work we do every day on behalf of the business community. This comprehensive approach gives members unprecedented new ways to increase their visibility and put their support behind the programs and initiatives that most directly align with their own goals and messaging.

Putting together our entire menu of sponsorship and advertising possibilities and offering it to our 1,500+ members is no small feat – and we couldn’t do it without the help of a small army. More than 80 volunteers have signed on to call our members and talk with them about which opportunities best fit their company and their budget.

The Chamber will be holding weekly update sessions to give updates on the progress of the campaign, recognize top-performing volunteers, hand out new leads and give out information about Chamber programs and initiatives. These events have been dubbed “Layovers,” in keeping with the overall theme of this year’s Reach Campaign: “Reach Around the World.”

And the Sept. 14 kickoff event launched the theme in style, featuring food and décor with a global flair to match the international feel of this year’s campaign. Campaign Chairman Ann Marie Baker, acting as the day’s “pilot,” greeted guests, while past Board Chairman Jeff Schrag of Mother’s Brewing Company offered words of encouragement – bedecked in custom Mother’s branded lederhosen.

But while the day definitely had a fun vibe, the teams of volunteers are all business when it comes to the job of raising money through the campaign. Through Sept. 20 – less than one full week into the main campaign (plus the two-week period for renewals from last year), the campaign had already hit more than 70% of its goal.

“The opportunities we have for members to engage with the Chamber are more than ever,” Baker said. “There are a lot of options that have been added at all price points and all levels that might be just the right thing for them – things that can help them further their business and network in a lot of different ways.”

The campaign is just hitting its stride, as well; volunteers will be making calls for the next several weeks – right up until the Reach Victory Party on Nov. 16.