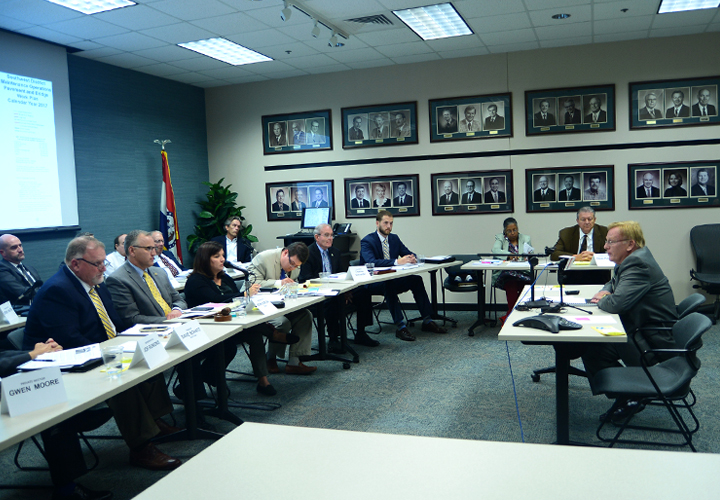 The Chamber has long advocated for increased funding for the state’s transportation infrastructure. Because of the direct correlation between transportation and economic development, we applaud any statewide effort to improve Missouri’s system.

Last legislative session, the General Assembly created the 21st Century Missouri Transportation System Task Force. The group has been asked to evaluate the condition of the state’s roads and bridges and look at current funding levels to determine if more is needed.

Part of that process is a series of monthly meetings around the state to gather public input. One such meeting was held at the Chamber offices on August 23. More than 15 members of the task force were on hand to hear presentations from members of the business community and the general public on the importance of our transportation infrastructure and ideas for funding.

First, the panel heard background information from the state Department of Revenue about Missouri’s 33,000 miles of roads and the status of funding, noting that the state is 47th in the country in terms of revenue per mile. One reason for the low revenue number is the state fuel tax – at 17 cents per gallon, it ranks 46th in the nation and has not changed in more than 30 years. The board also was told that 26 states have increased their investment in transportation since 2013.

Several state and community leaders provided ideas on how to address the funding issue – and why it’s so important to do so. Mayor Ken McClure said the city prefers increased funding outside of an increased sales tax, such as the fuel tax. He also urged the state not to transfer responsibility for lettered and numbered highways to the counties and cities.

“We’re proud of the transportation system that we’ve developed here,” the mayor said. “We’re proud of our collaborative spirit and abilities, and we offer that spirit of collaboration to help you in whatever way we can.”

Chamber President Matt Morrow also told the panel about our support for transportation funding, noting that transportation infrastructure is crucial in efforts to encourage businesses to expand as well as in recruiting talented employees to the area.

“Everything we do is about expanding the economy, creating jobs and creating opportunity for everyone who lives here,” he said. “There are few things that are as crucial to our success as our roads and our bridges, and it’s one of the areas where we’re in danger of sacrificing our natural geographic advantage.”

Dan Mehan, president and CEO of the Missouri Chamber of Commerce and Industry, also made the trip to Springfield. He echoed the importance of transportation for business and the economy, pointing to a Moody’s study that shows $1.59 of return for every dollar invested in transportation. He said that one solution would be to bring the gas tax up to the regional average or indexing the tax to inflation.

“Transportation drives our economy,” he said. “The business community is ready to engage on this issue. We need to step up and do our part.”

The task force will hold additional meetings throughout the state through the rest of the year to gather additional input and has been asked to present its findings and recommendations to the General Assembly by January 1, 2018.