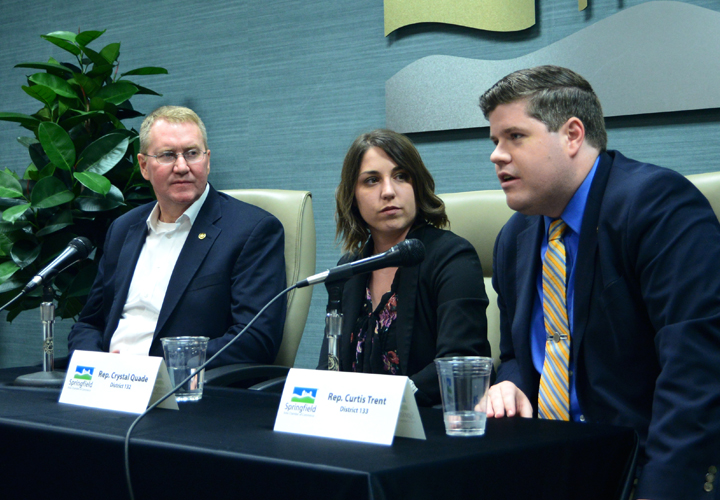 The first year in a new job can be challenging, stressful, exciting or nerve-wracking. If that new job happens to be serving in the Missouri General Assembly, it could be all of the above.

Three freshman representatives from the Springfield area visited the Chamber’s Governmental Relations Committee on June 28 to share their experiences and observations from their first year in Jefferson City. The consensus: There were many challenges to overcome and accomplishments of which to be proud, and there is optimism about what 2018 holds.

Reps. Steve Helms, Crystal Quade and Curtis Trent told the Governmental Relations Committee about their thoughts on the 2017 legislative session, including their proudest accomplishments and the biggest challenges they faced.

Helms was proud of being able to fully fund the state’s education formula for the first time, though he said he wished that significant cuts to higher education had not been necessary. He added that economic growth is going to be necessary to avoid continued cuts to programs in the future.

“Flat revenue and increased costs of Medicaid mean we’re going to need to grow the economy to meet those needs – and we can’t do it by increasing taxes,” he said.

He also noted that he was surprised that everything takes longer in the legislature than anticipated – a notion echoed by Rep. Quade. She, however, noted that she was somewhat aware of how the process works, having previously served as an aide to Rep. Charlie Norr before running for his seat when term limits prevented him from running for re-election.

She was particularly impressed by how much work staff performs each day in the Capitol. “Term limits mean people aren’t in the legislature all that long, so institution knowledge is at a premium,” she said. “That means we often rely heavily on staff for background knowledge.”

Quade, who served on the House budget committee and the Subcommittee on Appropriations for Health, Mental Health and Social Services, said it was important to understand the role social services play in daily life, especially considering how much of the state budget is devoted to social service costs. “I think it’s important to understand the perspective of people affected the most by those services,” she said, pointing to her background in social work and the nonprofit sector.

She added that while she did not sponsor many bills in her first session, she was proud to co-sponsor several items including legislation for a statewide prescription drug monitoring program. She also was not deterred that the bill did not make it through the legislature, noting that it was “a slow session” in terms of the number of bills passed – 61 this year compared to the average of 175.

Rep. Trent noted that there were indeed fewer bills passed, many have a significant impact, particularly for the business community. He pointed to Right to Work, labor reform and tort reform as big wins for the business community. He also said he’s optimistic about the future, noting that he hopes revenue will be made available to fund much-needed transportation infrastructure improvements and upgrades.

Representatives Quade and Trent both served on the budget committee this year, and all three legislators acknowledged the tremendous challenges presented by this years’ budget shortfall, that are only expected to get worse next year.

Rep. Trent noted that when there are multiple years of a budget shortfall, the state’s problems can snowball. Higher education took a significant cut this year, and Trent said he hopes the cuts will be more evenly distributed next year. “Institutions of higher learning are the crown jewels of the state, and we need to protect that,” he added.

The legislators also noted the state’s transportation challenges and the importance of funding our state system.

Since this meeting of the Governmental Relations Committee took place, the governor signed the FY 2018 budget and announced withholdings of more than $250 million. Those included an increased cut to higher education for a total of 9 percent reduction in core funding, and elimination of $5 million to support medical student training in Springfield and $1 million for a cooperative engineering program involving Missouri State University and Missouri University of Science and Technology in Rolla. In addition, withholdings included a cut to the K-12 transportation budget and a $10 million reduction to the state’s tourism promotion efforts.