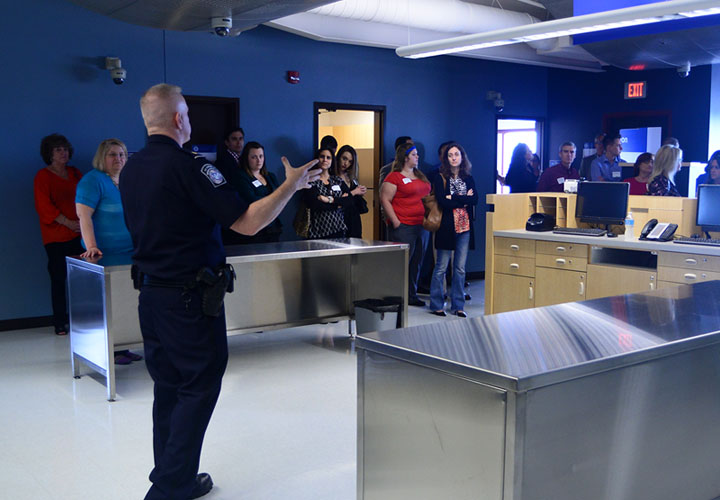 Companies looking to do business internationally may be aware that the Springfield-Branson National Airport has been home to a Foreign Trade Zone (FTZ) for two decades. In fact, until recently, it would have been possible to walk through the airport facility and not even know it was there.

But thanks to a recently completed $1.2 million renovation in a portion of the airport’s old terminal building, U.S. Customs & Border Protection – which operates the Springfield FTZ – has a state-of-the-art facility to ensure the safety and security of passengers and cargo entering the country through Springfield.

“We jokingly call it my ‘diva palace,’” Ky Neuleib, Springfield Port Director, told those in attendance at the April 14 meeting of the Chamber’s International Business Council and the Greater Ozarks International Trade Association. He noted the facility is a significant upgrade from the previous situation, which included performing customs check-in on the tarmac using a bus borrowed from the airport facility.

Meeting attendees got a chance to tour the new facility and hear a presentation from Neuleib and Airport Director Brian Weiler about the importance of the new facility, as well as growth at the airport and utilization of the old terminal.

In addition to the inherent security aspects, the idea of a foreign trade zone offers numerous potential benefits for businesses. For example, tariffs on items or components being imported can be deferred or potentially exempted, and the ability to keep items under customs bond all the way to Springfield rather than checking them out at a major seaport like New Orleans or Long Beach offers significant logistical advantages.

And yet the idea did not really take off in Springfield until 2011, when the FTZ was expanded through the Alternative Site Framework program. That program expanded the trade zone’s coverage area to a 23-county region through satellite sites. Now, three companies make use of FTZ sites; one of them, Jarden Consumer Solutions, has grown to employ 400 at its 1.85-million-square-foot consumer goods facility in Neosho.

“It’s not the right solution for all companies; it requires volume,” Weiler said. “But it offers distinct advantages for businesses that can use it.”

The new customs office is about more than just the Foreign Trade Zone – it also supports the airport’s international general aviation flight capabilities and allows Neuleib to safely inspect and clear bonded freight entering the country.

It’s a wonder there was even room for the expanded customs facility considering the recent increase in demand for space at the old airport terminal from its current tenant, Expedia. Thanks to a series of expansions since the company moved its call center into the building in 2010, the building is now 100 percent occupied.

That growth mirrors what is happening at the airport itself, which Weiler noted is one of the three fastest growing small hub airports in the country based on passenger numbers. The airport had more than 950,000 passengers in 2016, a record for the facility, and passenger numbers are up 10 percent year-to-date through March of 2017.

Despite the growth in passenger traffic, Weiler said supporting the growth of general aviation, trade and customs services at the facility is crucial to the area’s economy, noting that the Springfield FTZ is the only one of the Missouri’s three facilities currently operating from an airport – and could eventually grow out of the airport itself.

“We list five ‘flight plan’ goals at the airport, and one of them is supporting regional economic development,” Weiler said. “Even though the airport itself is growing so fast, we want to do more to market the Foreign Trade Zone.”