Telling a story and changing the narrative 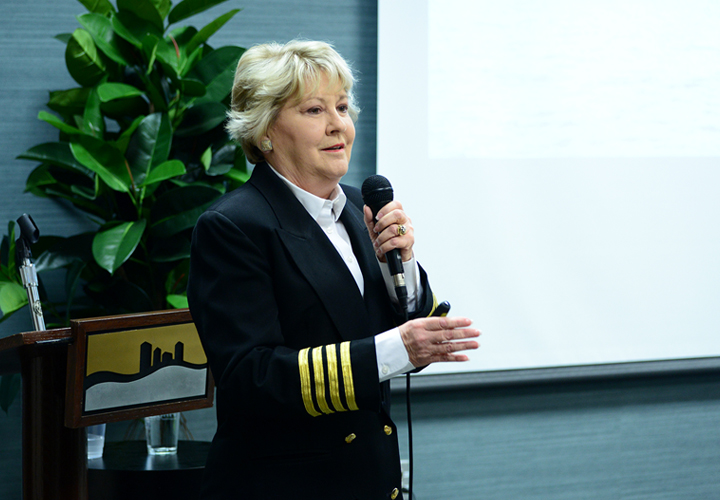 When Mary Kellogg’s husband, John Joslyn, told her about his plans to open a museum about the famous sunken ocean liner Titanic, she understood. After all, John had produced a major network television special about the expedition that found the shipwreck and even participated in the dives.

When John said he wanted to locate the new museum in Branson, Mary was incredulous; she referred to it as the place for “gray hairs.”

But in the decade since the museum opened, her opinion has changed, as she explained to members of The Network on March 21 during the first installment of the 2017 CEO Series. The museum is now part of a $20 million company that includes a sister museum in Pigeon Forge, Tennessee.

Mary oversees all day-to-day operations for the museums, but she is the first to say that the boss of the company is John – and it’s by design. She says the key to the company’s success is clear and consistent structure, which she learned in her previous profession. Both she and John have extensive backgrounds in television – Mary was a head of marketing and programming for CBS before spending 20 years as head of television for the Walt Disney Co. – and in television, hierarchy is everything.

“We would always set up the structure early,” she said. “You have to know who answers to who before you can figure out how to develop a new idea.”

She offered several insights to the 80+ young professionals in attendance:

Know your story and your audience – “At the museum, we made the decision early to tell stories,” Mary said. “There’s a story for every passenger that was aboard the ship.”

That story-telling approach ties in to the company’s core audience: women ages 25 to 54 and their families, who tend to visit during spring break, summer vacation months and during the holiday season. She also emphasized the importance of not casting too wide a net too early for customers: “Start narrow and build out, not the other way around.”

Employees come first – The company has emphasized an inclusive management style, sharing company information and numbers with employees and making sure everyone understands what’s going on in other parts of the business. Mary notes that inclusiveness gives all employees a feeling of personal connection and ownership to the museum.

“We’re working to build an experience, both for guests and for our employees,” she added.

Change is good ... and necessary – Based on Mary and John’s decision to leave successful TV production careers to enter the museum business, it should be no surprise that they embrace change.

One example: the company’s initial focus on marketing through print media has shifted to an almost exclusive focus on digital and social media. “We realized we were talking to the same people every year,” she said. She said Branson itself has been successful in embracing its changing nature as well, which has in turn led to new potential audiences for Titanic.

“The marketplace is like a downward moving escalator,” Mary concluded. “If you stand still, you go down. You only go up by running hard.”