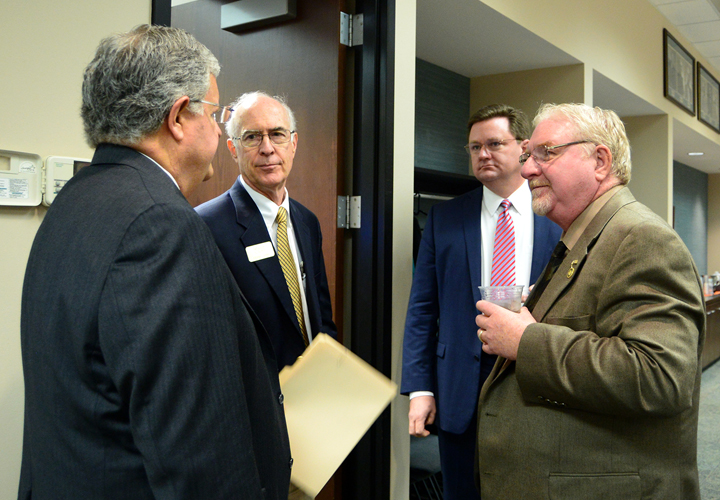 The kickoff of the 2017 Public Policy Speaker Series featured an impressive panel of senators representing the Springfield region. Senate President Pro Tem Ron Richard and State Sens. Bob Dixon and Jay Wasson all visited the Chamber on February 24 for the first installment of the 2017 series, sponsored by Lathrop & Gage. They offered a look at the 2017 legislative session, the beginning of their fourth and final two-year term in the Missouri Senate, as well as a look back at their years of service in the Missouri General Assembly.

Regarding the current session, the three discussed movement on a number of fronts. Wasson talked about the importance of workforce development, saying Missouri has looked at the workforce programs of other successful states like Alabama, Georgia and South Carolina. “I envision that in the future, when a company calls the Department of Economic Development, they’ll get a one-stop shop – concierge service to take them by the hand and lead them through the entire process.”

He added that the recent passage of Right to Work legislation is a good start, though companies looking to expand or relocate require access to a well-trained workforce when deciding on a location.

On a related topic, Dixon updated the crowd on the progress of legislation that would give Springfield and Greene County the option to ask voters for a sales tax to fund early childhood education. Senate Bill 264, called the Local Workforce Development Act of 2017, has passed out of Senate committee and now awaits a hearing by the full Senate before proceeding to the House, where similar legislation passed in 2016.

“All the data backs up claims about the importance of early childhood education,” Dixon said. “This bill responds to a need with a long-term vision.”

Sen. Richard discussed the potential for downsizing the number of state tax credits, a topic high on the list of new Gov. Eric Greitens. Richard said some downsizing may be in order, though he doubts a complete elimination of the program is on the horizon, and recognized some tax credits are valuable job creation tools.

“Every new (governor’s) administration always comes in to office looking for programs to eliminate to save money,” he told those in attendance. He noted that a tax credit review group won’t present its findings to the governor until this summer, meaning no changes would occur until next year – an election year. “There will be plenty of time to prove the worth of [economic development] tax credits.”

Sen. Richard also addressed the tough budget year the state is facing, including concern over the elimination of programs like the Missouri State University partnerships for pharmacy and mechanical engineering and the Springfield Clinical Campus partnership with CoxHealth and Mercy. The senator was optimistic that at least part of the funding could be restored. “That list of programs and the progress made is important. You have to keep a promise when you start building programs over time,” he said.

All three senators began their service in the Missouri House of Representatives in 2002. Each served eight years in the House and is in his sixth year of service in the senate. With a year and a half left, the three southwest Missouri leaders reflected on their time in the General Assembly, sharing insight on their proudest moments and what they have learned during their time in Jefferson City.

Proud moments included the ability to serve the state in their elected roles, the establishment of the MODESA light program, and their support for tangible projects such as the renovation of MSU’s Glass Hall and the development of Jordan Valley Park.

Chamber president Matt Morrow praised all three senators for their service to Missouri and for being strong Chamber partners and champions for economic development.