A success for the Chamber’s legislative agenda and the state 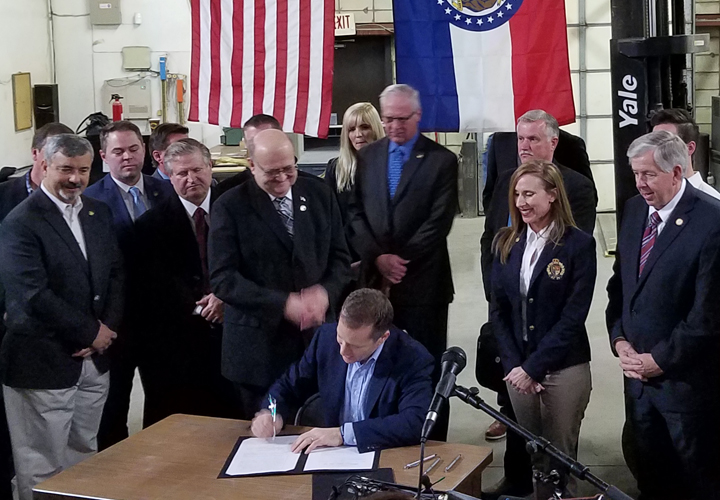 Each year, Chamber volunteer leaders spend months deliberating and deciding what priorities to include in the annual legislative agenda. The 2017 State Legislative Agenda covers a wide range of topics, from workforce development to funding for education and transportation.

But one of the first items in the agenda to successfully make it through the state legislative process in 2017 was the Right to Work legislation, signed by Gov. Eric Greitens on February 6. He laid out the reasons for his support of the legislation during the bill signing event:

The passage of the legislation did not happen overnight. It took many years of leadership in the Missouri House and Senate to keep moving the needle and pushing the issue forward. It originally passed the legislature in 2015, but was vetoed by then-governor Jay Nixon.

Gov. Greitens actually signed the bill in three locations on February 6, but he made his first stop Springfield. That choice can be attributed to a number of factors, including strong support for the bill from the Springfield region’s legislative delegation and the support of the Springfield business community.

The Springfield Chamber is well aware of Springfield businesses’ support for the idea. It’s why we were the first in the state to voice our support for Right to Work back in 2010. Becoming a Right to Work state will encourage private sector job growth and put Missouri on the radar of more companies looking to expand or relocate. Having the ability to compete for more economic development projects will translate into more quality jobs available to Missourians.

Right to Work, however, is not a silver bullet. It’s a good step forward for Missouri’s competitiveness, but we must quickly address other issues such as workforce training and preparedness and the need to streamline the way businesses interact with state agencies.

Several other workplace and business climate issues in the Chamber’s agenda also could see progress this session, from tort reform to review of prevailing wage laws and the state’s unemployment insurance trust fund.