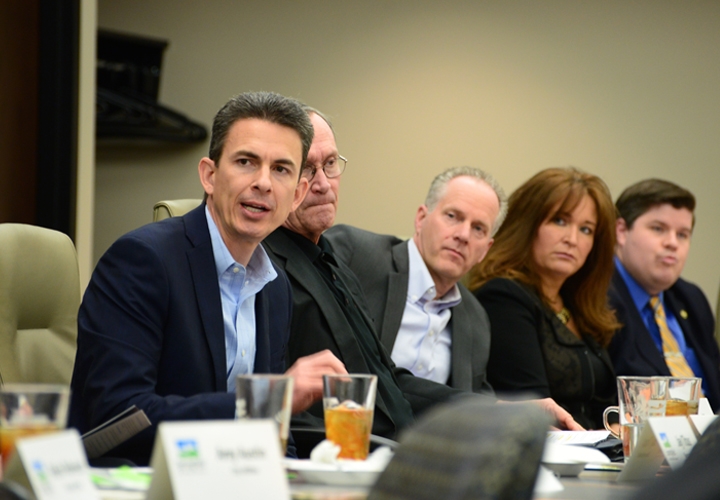 The new year brings a wealth of possibilities in the Missouri Legislature, along with significant budgetary challenges. In an effort to address both sides of the legislative coin for 2017, Chamber volunteer leaders and staff have been advocating to state elected leaders in a variety of ways about the issues most important to our members.

The efforts for this session started in late 2016 with the development of the Chamber’s 2017 State Legislative Agenda and Federal Legislative Agenda. They grew from a combination of staff research, input from Chamber members and committee review and ultimately were approved by the Chamber Board of Directors in December. When the new session started in early January, Chamber staff were on the scene, beginning their weekly trips to Jefferson City to advocate for a wide range of issues.

Those issues and more were also in the spotlight when the Chamber hosted its annual legislative luncheon on January 20. Nearly two dozen Chamber board members and volunteer leaders were on hand to make the case for a number of priorities to members of our local legislative delegation.

The elephant in the room during the discussion – as it likely will be for much of the upcoming legislative session – was the expected $400+ million shortfall in the 2017 budget. “We realize that you’ll be grappling with very difficult issues and there will be hard choices ahead,” Board Chairman John Wanamaker told the legislators. “But as it relates to investments in key areas, we’re falling behind surrounding states, and it’s keeping us from being as competitive as we could be.”

Some of the Chamber’s legislative priorities are poised for progress this year. One example: Right to Work legislation, an issue for which the Springfield Chamber was the first in the state to publicly voice its support. That legislation is, as of the afternoon of February 2, on the desk of Gov. Eric Greitens awaiting his signature.

Another Chamber priority is enhanced funding for workforce development. Joe Reynolds, president of CSI, spoke on the issue at the recent luncheon, saying most companies are competing more for talent than they are for customers. He noted that other states that have successfully tackled the workforce issue have made it a top priority and significantly increased funding.

The Chamber also applauded the early efforts of the legislature to move labor reform and tort reform and work toward a state solution to allow Transportation Network Companies such as Uber and Lyft to operate throughout the state.