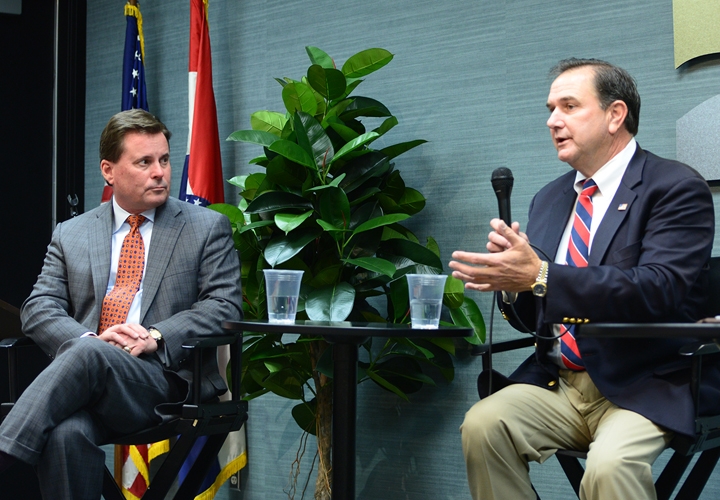 Sen. Mike Kehoe (R-Jefferson City) and Rep. Kevin Austin (R-Springfield) were at the Chamber offices as part of our ongoing Public Policy Speaker Series. Among the top issues they mentioned were the four main areas of potential reform: labor reform, tort reform, tax reform and regulatory reform. “Those items would show that Missouri is open for business and that we’re an environment that will foster continued business growth,” Kehoe said.

Those reforms don’t come with costs for the state, which is especially advantageous given a budget situation that Austin called “tighter than tight.” “Many of these reforms don’t cost anything, but they do make the environment more conducive to growth, which will increase revenue,” he added.

Workforce development & education
Both legislators reiterated their focus on workforce development issues. Kehoe noted that in talking with business owners from around the state, both urban and rural leaders agree that their biggest need remains skilled workers.

“We need a concrete policy to develop workforce skills,” Kehoe said, noting that it may require greater investment in technical and vocational training as well as discussions with trade unions about how to increase the numbers of workers getting skills training. “We have to stop talking about it and start doing something.  We have to start at the earliest possible levels to get the next generation trained and ready to go to work and to compete for the jobs that are available.”

Austin echoed the importance of workforce development and said it’s a top priority in the House as they continue to seek feedback from business and education leaders about their workforce needs. “I’ve always said we need more jobs, but we also need more skilled workers to fill those jobs,” he said.

On the topic of college-level programs, Austin mentioned a bill he sponsored last session that would have removed restrictions on the degrees higher education institutions can offer. While that bill didn’t pass, he said it could offer choices at more schools such as Missouri State University. “Mizzou is our flagship institution, and it will remain that way, but offering more options can help keep kids here for college, and remain here to join the workforce after they graduate,” he said.

Training for those vital skills starts well before college, and both Austin and Kehoe mentioned promising changes to both the support levels for the state’s education funding formula and the potential for increased funding for early childhood. “As we start to close the gap in the Foundation Formula, we will be able to concentrate more on funding early childhood education,” Austin said.

Transportation
Finding funding for needed transportation infrastructure repairs and improvements has been difficult for several years. Kehoe said that the recent passage of the federal five-year highway bill offers more certainty about funding levels, but finding state funding is still critical – and unlikely to come from a new tax in the current climate.

“I’ve talked with former Gov. (John) Ashcroft about how he was able to raise the state’s gas tax,” Kehoe said. “He said he felt the conservative approach means that you don’t pass a problem on to someone else; you address it.”

Austin noted that President-elect Donald Trump has pledged an infusion of funding for transportation infrastructure, but that money isn’t a silver bullet and won’t address all the needs.  Both Austin and Kehoe discussed innovative funding proposals that should be on the table for consideration.

In general, economic development in all of its forms will likely be at the top of the state priority list for 2017. “I think our priorities were set pretty clearly on November 8,” Kehoe said. “We need to enact public policy that allows our state to grow. We can’t stay stagnant; we need to start to accelerate. Put your seat belts on – we’re really going to go for a ride.”