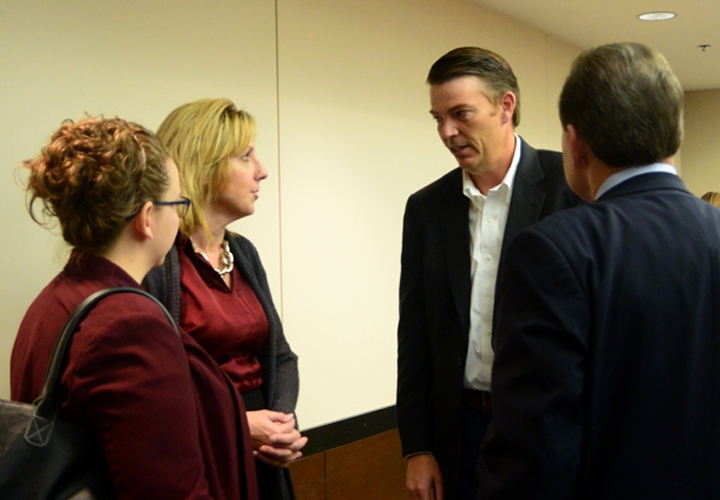 Chamber staff recently brought State Speaker of the House Todd Richardson to the Chamber offices to talk with business and education leaders about workforce development and education issues, and the speaker heard about the continued challenges those leaders face.

Richardson visited the Chamber on October 10 to kick off a weeklong tour of the state covering a number of issues, but the workforce focus of his Chamber visit was no coincidence. The need to find, develop and retain skilled workers has been a consistent theme from members in recent years—and that need has been reiterated to the speaker. “I’ve had multiple conversations with Matt Morrow and this Chamber about specific areas where Missouri has room for improvement in the area of workforce development,” he told the group, also noting that workforce development is key to Missouri’s ability to compete for jobs.

Employers had the chance to visit with Speaker Richardson about the workforce challenges that impact their ability to grow. Larry Spilker, plant manager with plastics manufacturer Buckhorn, Inc., touched on one of the challenges that occur when unemployment is as low as it currently is in Missouri. “The great news for us is that we have lots of expansion,” he said, “but it’s hard to find the qualified talent to fill the jobs.” He noted the biggest issue is a need for more training in “soft skills” such as promptness, regular attendance and the ability to work in a collaborative environment.

And as other manufacturers described, the need goes beyond entry-level talent. Joe Reynolds, president of Central States Industrial (CSI), said his company struggles to find employees with high-tech engineering skills. In fact, CSI helps finance professional certification training for some of its employees—and hopes the state will continue to offer funding for those efforts through initiatives like the Missouri Works Customized Training Program.

Richardson agreed that there is a need for continued, stable state funding of workforce development. He pointed to Alabama, which spends roughly three times as much each year on customized workforce development programs as Missouri despite having a 20% smaller population.

There was also agreement that finding the right workers starts with feeding the education pipeline. Missouri State University President Clif Smart said colleges and universities need the flexibility to create and adjust program offerings to meet the demands of the market. He pointed to areas like science, where there are four jobs for every graduate, and health care, which continues to face huge shortages of skilled workers.

Those sentiments were echoed by Springfield Public Schools Superintendent John Jungmann. He told the story of seeing a former student at a recent University of Arkansas football game; the student, who was valedictorian for Monett High School, said she had gone to U of A because of aggressive incentives offered to out-of-state students. Employers in the room, like Jeff Childs, with SVN/Rankin Company, LLC, echoed that frustration. “Until Missouri really begins to do everything we can to retain the top talent, you will see the best and the brightest look to other states,” he said.

Speaker Richardson said the problem is that Missouri’s economy is not growing as quickly as our neighbors, meaning revenue constraints are more difficult to navigate. He noted that labor reform, tort reform and tax policies are being discussed, but workforce development is where Missouri is suited to make strides.