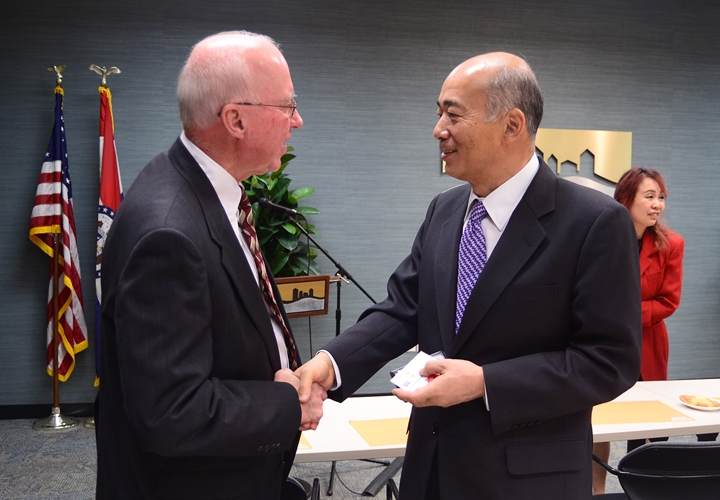 As the Japanese ambassador to the United States, Kenichiro Sasae knows the importance of interpersonal communication—regardless of cultural divides.

“Human relationships matter,” he told an October 12 gathering of the Chamber’s International Business Council. “In Japan, we care about the relationships and the level of trust. Without knowing the people, you can’t do business.”

The presentation at the Chamber office was the start of a whirlwind two-day tour of Missouri’s Seventh District that also took the ambassador to Missouri State University, College of the Ozarks and numerous business and agricultural sites.

Sasae noted that Japan is a strong trade partner with southwest Missouri, having purchased more than $200 million in goods in 2015 from the region and helping to directly and indirectly support 10,000 jobs in the Show-Me State.

“We are quite a good customer, and we’re proud of that,” the ambassador said.

Sasae was invited to visit southwest Missouri by U.S. Rep. Billy Long, who serves as co-chair of the Congressional Study Group on Japan. Long is a strong proponent of international trade and connecting with leaders from other nations; he previously brought the ambassador from Kazakhstan to the Ozarks in 2014, also to highlight trade opportunities.

“It’s vital to understand other cultures, build relationships and understand everyone’s side,” he said. “That’s what leads to important connections and opportunities for business and trade.”

Both Long and Sasae noted the importance of continuing to support international trade, and both voiced their support for the Trans-Pacific Partnership, which has not been particularly popular in recent presidential politics.

“It’s a pity,” Sasae said. “Unless you do business together, there’s no potential for development for the future. It takes leadership with courage to say something that isn’t popular to the mood of the country.”

He noted that many leaders in his own country have expressed fear in the past about the potential damage international trade could have on Japanese farmers and business owners.

“The fear was ungrounded,” he added. “Of course when there is trade, you have to face competition. But competition makes you strong.”