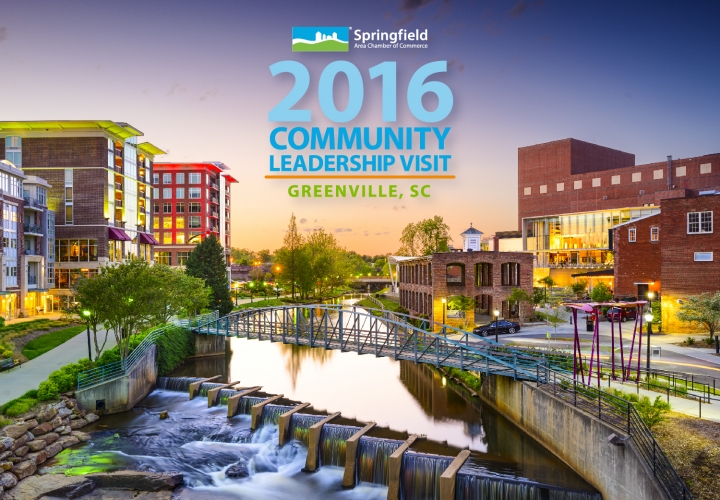 One look at the downtown district of Greenville, South Carolina, makes it clear that great pride is taken in its center city. It’s also clear that the area’s development couldn’t have happened without clear vision and strong commitment from government, business, not-for-profits and the community.

It was this concerted redevelopment effort—as Greenville leaders put it, a “30-year overnight success story”—and all of the factors that went into it that helped convince the Springfield Chamber to choose Greenville as the destination for its 23rd annual Community Leadership Visit (CLV) September 15-17.

A record delegation of more than 60 Springfield business and community leaders made the trip to Greenville to meet with their counterparts, learn about the city’s best practices, discover insights into community growth and develop new professional connections. 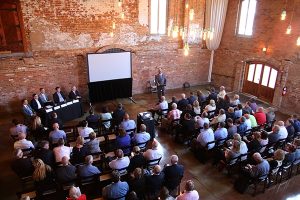 Downtown was the centerpiece of the trip, but it wasn’t always a strength for the city. Like many cities in the 1960s and 70s, downtown was dying due to an exodus to the suburbs.

“Opportunities presented themselves when we hit rock bottom,” said Bob Hughes, CEO of Hughes Development Corporation and a 35-year Greenville real estate veteran. “But buildings are just the infrastructure; the city of Greenville is what’s in the buildings.”

Greenville’s turnaround effort is so impressive that two cities were visiting at the same time: A visit from the Southwest Indiana Chamber of Commerce in Evansville (the 2016 Chamber of the Year as named by the Association of Chamber of Commerce Executives) overlapped the first day of the Springfield trip. 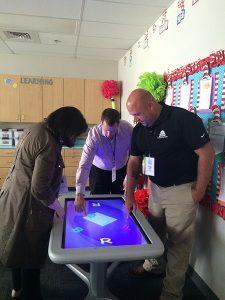 Members of the Springfield delegation came away with several ideas, not the least of which is the fact that Springfield has many of the ingredients to be successful already.

“I think sometimes Springfield lacks self-esteem,” said Jeff Schrag, owner of Mother’s Brewery and The Daily Events. “We have the elements, but maybe we don’t sell them as well as we could.”

Another key takeaway was the importance of collaboration between government and private business. From Riverplace to Greenville’s downtown Hyatt Regency hotel and surrounding developments, the city and county helped create infrastructure that would allow for successful private development.

“The level of public-private partnership is impressive,” said Brad Erwin of Paragon Architecture. “It shows collaboration with focused energy and a cohesive approach, and it shows a city that was willing to take risks that have paid off. What is our shared vision? And what steps can we take to get there?”

But as Chamber board chairman Debbie Shantz Hart said, the key is using the impressive lessons taken from the trip as an example. “We need to be a community of doers,” she said, encouraging Springfield leaders to take action in planning our future. “If we stick to the status quo, we move backward.”