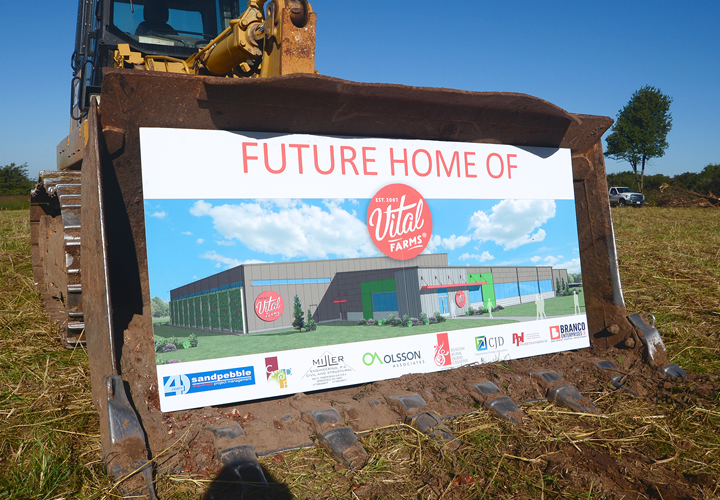 When the nation’s largest brand of pasture-raised eggs chose the Springfield region for its new facility, the company noted the city’s development-ready sites and its coordinated approach, as well as its central geography, skilled workforce and access to transportation, as reasons for the choice.

Austin, Texas-based Vital Farms announced at a September 28 groundbreaking ceremony its plans for a new 82,140-square-foot facility in Partnership Industrial Center West (PIC West). The new building will process the company’s pasture-raised eggs and the project will create 50 new full-time jobs with benefits in the first year, with growth plans to create up to 50 additional jobs in the future.

Vital Farms sought to build a processing facility near its highest concentration of farms, and economic development staff began working with the company on behalf of the Springfield region. Vital Farms ultimately chose the Springfield region and the 11-acre site in PIC West due to its central location and built-in infrastructure, which offered the company greater speed to market.

“We initially considered Springfield based on its proximity to our farms and infrastructure, but we’ve come to appreciate and embrace the community’s talented workforce, diligent coordination and authentic partnership. The people of Springfield are truly exceptional,” said Russell Diez-Canseco, Vital Farms president.

Founded in 2007 with a single farm, Vital Farms has grown to encompass a network of more than 100 independent small family farms that focus on humane animal welfare and sustainable farming, providing at least 108 square feet of outdoor pasture per chicken.

With a local partnership team that works cooperatively with expanding companies and project managers at the state level, the Springfield region will continue to encourage business growth from companies like Vital Farms.