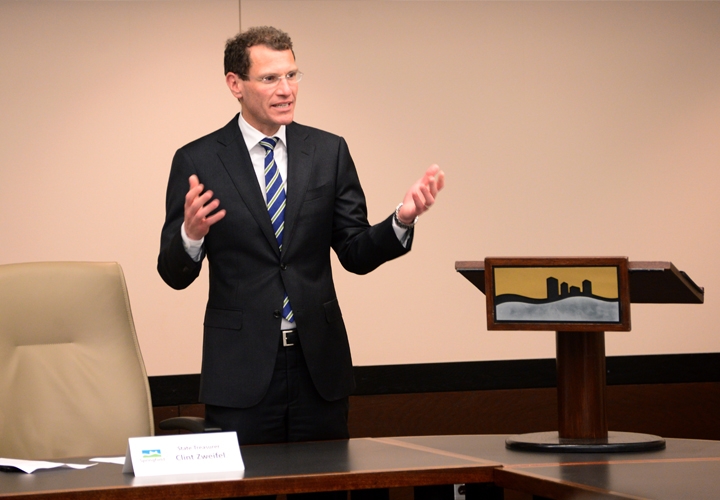 Missouri is in good financial shape, though the next few years will be crucial in determining whether that healthy outlook continues.

That was the message from Missouri State Treasurer Clint Zweifel when he visited the Chamber on July 7. Zweifel, speaking to the Chamber’s Governmental Relations Committee, is wrapping up his second and final term as the state’s treasurer and chief financial officer. Term limits prevent him from running for the office again.

Zweifel and his team have a large task. He manages the state’s $3.5 billion investment portfolio and more than $1.5 billion in low-interest loans for businesses, as well as the Missouri 529 College Savings Plan (MOST), which boasts $2.5 billion in assets among roughly 150,000 total accounts.

During his discussion, the treasurer mentioned several programs that have grown during his seven-plus years in office.

Zweifel said the key to continued strength is finding ways for government to add value by offering effective and efficient programs. That means programs run by local communities, supported by strong state infrastructure.

That infrastructure, however, is at a crossroads. While Missouri is financially strong—one of only eight states to maintain a “AAA” bond rating—Zweifel says three issues will largely determine our continued strength.

“We have a long history of fiscal discipline that comes from both political parties,” Zweifel said, comparing Missouri’s condition to neighboring states. “That’s a real source of financial strength for us, and we should continue to draw on that discipline moving forward.”