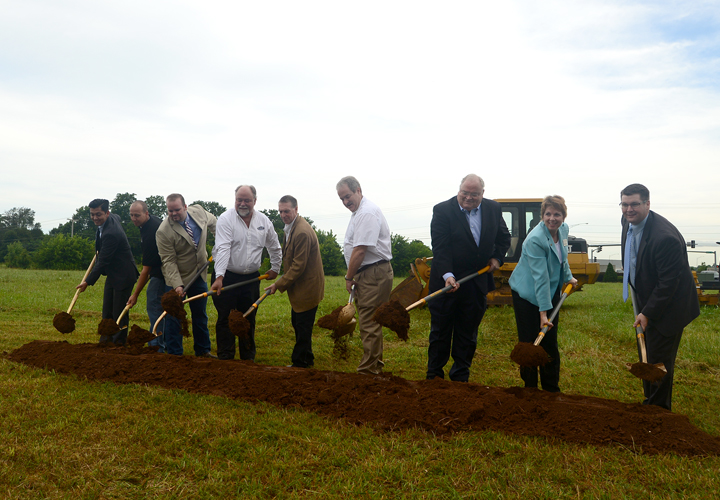 A July 15 groundbreaking ceremony at Partnership Industrial Center West (PIC West) is a strong indicator of continued positive movement in the manufacturing industry and the overall southwest Missouri economy.

JRI Holdings, an industrial cleaning systems manufacturer, is investing $5.6 million to expand its capacity and will move into a new 66,000-square-foot facility when it’s complete in early 2017. It is consolidating local operations from two separate facilities in east Springfield.

The groundbreaking is the first example of renewed interest in the west Springfield industrial park, and it signifies good things to come, said Ryan Mooney, the Chamber’s senior vice president of economic development.

“It’s no secret that the economic downturn several years ago hit the manufacturing sector hard,” he said. “But manufacturing has been growing steadily for several years, and a number of existing buildings have been purchased for redevelopment. So this new facility is a great example of how strong that sector of the economy is.”

General contractor Rich Kramer Construction is constructing the facility and will lease it to JRI.

PIC West is a planned industrial park developed by the Springfield Partnership for Economic Development, a partnership of the City of Springfield, Greene County, City Utilities, the Chamber and its economic development arm, Springfield Business Development Corporation. JRI Holdings will be the 10th tenant and the 12th building in the center.

PIC West was developed when the original Partnership Industrial Center in east Springfield approached build-out. Its appeal is its development-ready sites with built-in infrastructure such as roads and utilities and its proximity to I-44 and the airport.

“We know this site is attractive to businesses looking to build large, high-quality manufacturing facilities, and we expect construction of new buildings like this one to continue,” Mooney said. “Manufacturing is a leading indicator for the economy, so the fact that this kind of growth is happening in our area means nothing but good things for the economy as a whole.”

“Our new facility will help us demonstrate our commitment to our products, our customers and to Springfield,” Jones said.