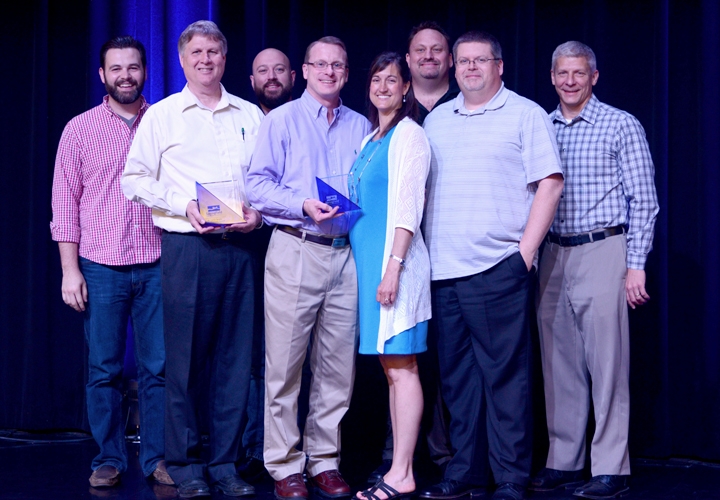 During its annual event on May 4, the Springfield Area Chamber of Commerce announced Interactive Dynamics, LLC as the recipient of the 2016 W. Curtis Strube Small Business Award.

The technology company was selected by a panel of independent judges from a group of finalists that included Club Management Services, Lew’s Fishing/Do Outdoors, Q & Company and Revel Advertising.

Interactive Dynamics was created through the consolidation of three entities: The App Pros, a professional mobile app developer; industrial computer enclosure developer DustShield; and interactive kiosk maker Phoenix Kiosk. Customers include FedEx, Whirlpool and Loren Cook. Each of the three businesses exist as a brand of Interactive.

Interactive Dynamics employs 24 and is owned by Strafford-based AmProd Holdings, LLC. Jody Chaffin, one of the co-founders of App Pros, is president.

“You don’t think of Springfield as a technology hub, but we consolidated our business operations here because of the work ethic and the capability to hire good people,” Chaffin says.

The company started with 15 employees in 2015 and remains in growth mode—and Chaffin notes that growth comes with a very specific goal. “Our philosophy is to find people who are smarter than we are,” he says. “Those are the people who can make our team better.”

The Small Business Award is named for Dr. W. Curtis Strube, late director of the Breech School of Business Administration at Drury University, who was a dedicated advocate of small business and founder of the Small Business Council.

This award, presented by the Chamber’s Small Business Council since 1992, celebrates the success of the organization’s small business members and recognizes the important role small businesses and entrepreneurs play in the local economy. Roughly 85 percent of Chamber members have 50 or fewer employees, and the Chamber realizes the important role those businesses play in our economy. That’s why we work diligently in a number of areas: