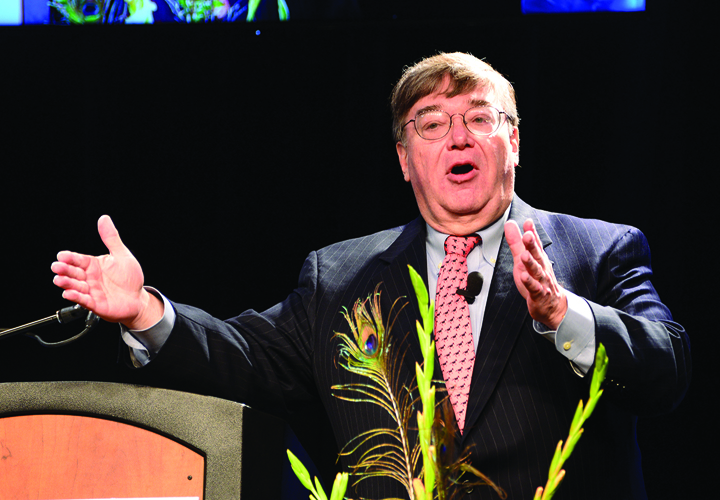 The “combustible” atmosphere in today’s political arena isn’t so much a mystery as a logical result of several factors careening toward Decision 2016. Political analyst Charlie Cook explored the political scene in America for a full crowd at the Feb. 3 annual meeting of the Springfield Business Development Corporation, the economic development arm of the Chamber.

Cook is editor and publisher of the nonpartisan Cook Political Report and political analyst for the National Journal Group. With stories and witty insights, he surveyed national politics.

Political parties are absorbed in “ideological sorting” and so have moved to extreme left and extreme right, compared to their platforms 50 years ago. This has left a large group in the middle, and these people have tended to drift away from being involved at all.

Cook said today’s media culture allows people to seek only news sources that validate their own views, creating “ideological silos.” He recalled a time when everyone had the same news source, usually the evening newscast on television. Now it’s easy to watch or read or listen to only those sources compatible with the person’s own beliefs.

Economic anxiety has created an anger among many citizens. Salaries in the average household haven’t made many gains since 1999. “That’s corrosive and it creates anger, it creates angst,” Cook explained. “The rise of populism is a result of this anger at institutions.”

And then there’s anger at politics. It’s a common belief that Congress is not functioning well—or at all, Cook said. Lawmakers have promised changes, but the changes don’t come. “People feel betrayed by their own political leaders.”

These are the undercurrents rippling through America’s political climate and will impact the coming presidential election, he said.

Cook also did some of his own handicapping of Democratic and Republican contenders for president, but added with a chuckle, “Both parties would maybe be better off with placebo candidates.”

Also at the lunch meeting, the SBDC shared successes in economic development over the last year. Find details in the SBDC 2015 Annual Report.