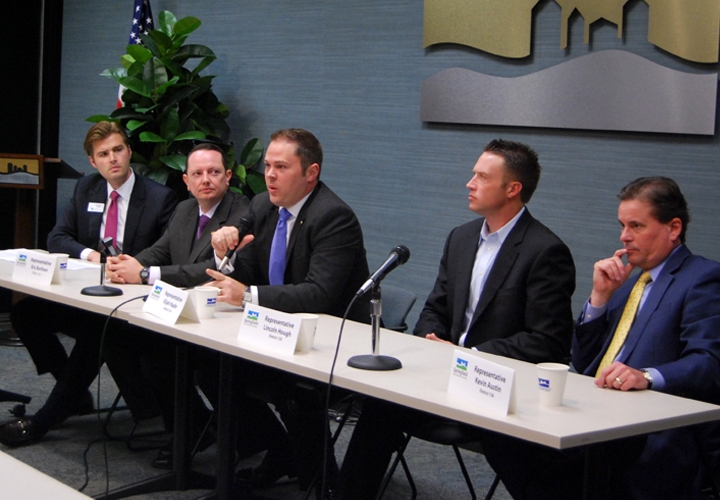 More than 50 young professionals turned out bright and early last week to hear what major issues Springfield’s state representatives are looking to tackle in the 2015 legislative session. In the joint meeting of the Chamber’s Network for Young Professionals and the Governmental Relations Committee, legislators fielded questions on a variety of topics ranging from entrepreneurship to generational engagement in the political process. Below is a snapshot of what they said.

Q: Is there a particular issue that you see being the major focus of the 2015 session, and if so, what?

“Of course the budget is one of the big issues that we’ll face. Roads and bridges will be another big issue, and I’m on the economic development and small business committees, so we again will be looking for ways to generate business here and to attract entrepreneurs and investors. As part of that we’ll be looking at tax credits, a couple of the Chamber priorities, and I know we’ll be looking at data storage again. We’re going to get this one across the finish line one of these days—maybe this is the year.”

“One of the issues that will be big this coming year, and one that doesn't have as much impact in Springfield as it does around the St. Louis and Kansas City areas is the school transfer issue. St. Louis and Kansas City have some unaccredited school districts, and there's been a big fight about what we're going to do in order to help those kids get an education. One of the big issues is getting them into a school district that is accredited and deciding how we divvy up the money that the state is spending on those education facilities and then what opportunities would allow them to go to non-public schools.”

Q: Millennials in America now outnumber Baby Boomers, but Baby Boomers are considered a more powerful voting bloc. How can young professionals move the needle on issues they care about?

“The people that we see all the time are really people that are in meetings like this. I don’t believe that the issues that are pertinent to our generation right now are on the back burner because we all have the same background that you do. That being said, stay involved, get to know people … Get up early in the morning. Don’t put a tie on. Come to coffee and hang out at the Chamber.”

“[Right to Work] is the one thing that would dramatically move the state forward in a way that I think would free the worker to have the choice to do what’s in their best interest. If they want to join a union, they have the right to join a union. If they don’t want to join a union, if that union is not serving them, they should have the right to not pay dues to that union, plain and simple. And I think that the union will be responsive and do better when employees have a choice. We’ve seen that states that have given employees that choice are growing and accelerating at a much faster rate than the state of Missouri.”