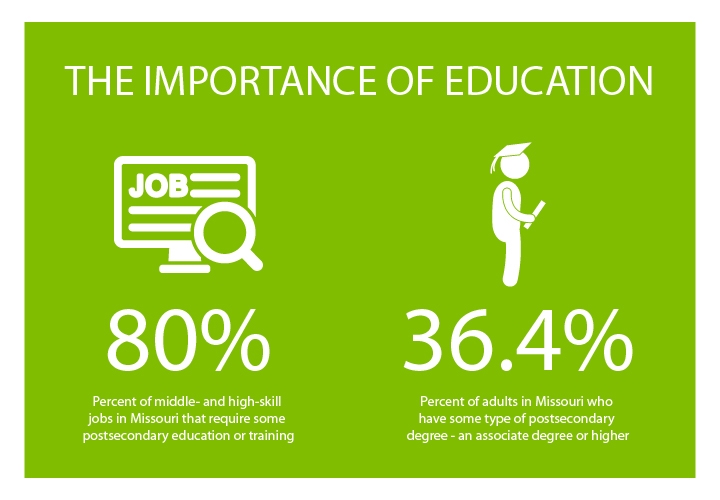 Just days after announcing her retirement from the Department of Elementary and Secondary Education, Commissioner Dr. Chris Nicatro provided Chamber members with what could very well be her last update on the state of education in Missouri.

In the update, Nicastro highlighted a number of different data points in order to provide a general overview of Missouri’s education system.

“Our focus in the department and our overarching plan has not changed,” Nicastro said. “The overarching goal is for Missouri to be among the top 10 performing states by 2020. I’m confident that that focus will continue for some time to come.”

Nicastro explained that the state still has a lot of room to improve. Currently, Missouri ranks 27th for overall annual rate of growth in student achievement in math, reading and science out of 41 states. Internationally, the United States as a whole ranks 36th out of the developed countries in the world according to the Organization for Economic Cooperation and Development PISA scores.

“Particularly business people have recognized that this educational gap internationally is a significant issue that we have to address,” Nicastro said.

“That speaks clearly to your interest,” Nicastro said, “because clearly you need graduates that can apply the knowledge that they have to whatever situation that they face in your organization.”

One way that the Chamber has advocated for improvement in this regard is in the adoption of rigorous standards for the fundamental coursework that students encounter at each grade level. The Chamber has also advocated for continued investment in all levels of public education and legislation that would expand access to high quality early childhood education programs, especially for at-risk children.

Two important steps have been made toward these goals. Last session, legislators approved a significant increase in the state budget for education, and according to Nicastro, progress is also being made toward applying for a $17.5 Million grant which would expand early childhood education centers around the state.

In addition to high school graduation rates, Nicastro highlighted that for the first time 100 percent of Missouri students will take the ACT. The test will be administered free of charge to all students, and will be a requirement for graduation.

The hope is that by administering the test statewide, it will encourage more students to pursue secondary education, which according to Nicastro should be a major focus going forward.

“Reports indicate that about 4 million jobs remain vacant nationwide,” Nicastro said. “Even though unemployment rates remain very high, there are lots of jobs. We just don’t have a workforce that meets the needs that business and industry has said that we need to meet.”

We are also spearheading the P20 Council of the Ozarks which is a partnership of educators, employers, community members and policymakers working together to provide consistent leadership thus ensuring seamless progression through from early childhood education to the workforce and society.