Chamber panel examines “Access to Justice” in our region 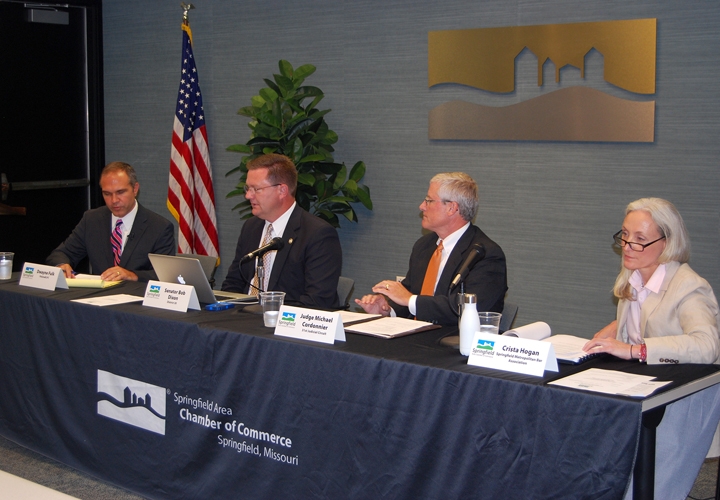 Recent legislative changes are improving access to justice and positively impacting businesses in our region.

In a meeting of the Chamber’s governmental relations committee, State Senator Bob Dixon, Circuit Judge Michael Cordonnier, Dwayne Fulk of Polsinelli, PC and Crista Hogan of the Springfield Metropolitan Bar Association discussed how these changes came about and what they mean for the business community.

Executive Director of the Springfield Metropolitan Bar Association, Crista Hogan explained that lengthy disputes in the judicial system create uncertainty for business, which is still a concern.

“As long as you have a lack of uncertainty as a business owner, then you’re not going to expand,” Hogan said. “The one thing that probably impacts every business is the dissolution of marriage. If that takes a really long time, then you may have an employee who is not at their best. So, resolving those types of issues are good for business as well as for the preservation of our families.”

As discussed by the panel, several items which passed during the legislative session could help alleviate backlog in the system.

For the first time in more than 30 years, legislators made major changes to Missouri's criminal code with the passage of Senate Bill 491. It’s expected that a number of these changes will reduce the burden on the system by making the code easier to administer but also by making certain penalties more proportionate to the crime.

“It was very difficult for someone to pick up the statute books and really be able to sort through the code—it was really more a collection of statutes,” bill co-sponsor, Senator Bob Dixon said.

Dixon explained that he and his colleagues had four primary goals in revamping the code. The first was to make the language clear and easy for practitioners to understand. They also sought to consolidate some of the offenses and eliminate others which were technologically obsolete or unused or underutilized.

“We don’t need 15 or 16 assault statutes based on what type of person is being assaulted. Assault should be assault,” Dixon said.

Lastly, the group wanted to ensure that the penalties prescribed by the statutes were proportionate to the crime involved as well as other crimes.

“Due to degradation, it was a greater felony to litter on state property than to write a bad check,” Dixon said in what he acknowledged was one of the more extreme examples.

The new criminal code will not take effect for another two years, and in the meantime, legislators and other stakeholders will continue to review and revise the sections of the code that were revised as well as those that were not.

Along with revisions to the state’s criminal code, legislators secured two additional circuit court judges for Greene County as well as funding which will help pay for a new courthouse.

“Throughout all of our lifetimes, associate circuit court judges were allocated to counties based on population,” Circuit Judge Michael Cordonnier said.

Cordonnier explained that in the past, every county got one judge, and because of Greene County’s population we had four circuit court judges. This posed a problem because Greene County had a much higher caseload proportional to its population because it is a hub for the region.

“Springfield is a big community, as is Greene County. Anybody that has left this community in the morning knows that there is a stream of traffic coming our way,” Cordonnier said. “As a result, the population did not reflect the business of the court house.”

A Missouri judicial weighted workload study conducted several years ago found that according to Greene County's caseload, it needed six additional judges on top of the amount it was allotted based on its population.

The two additional circuit court judges are a step in the right direction, however, currently the courthouse is full with no more room for additional judges. A new surcharge on criminal cases should eventually help alleviate overcrowding once enough funds are collected to build a new municipal courts building. Both Senator Bob Dixon and Representative Kevin Austin were instrumental in securing this funding.

Going forward, these changes will help alleviate choke points on the system, but as the panelists explained, in a system this large, there is still a great deal of room for improvement.

“We have to think outside the box, and that’s really hard to do when the box is so huge,” Dixon said. “But we have to, in order to find some creative solutions.”