Ambassador of Kazakhstan visits Springfield in search of trade opportunities 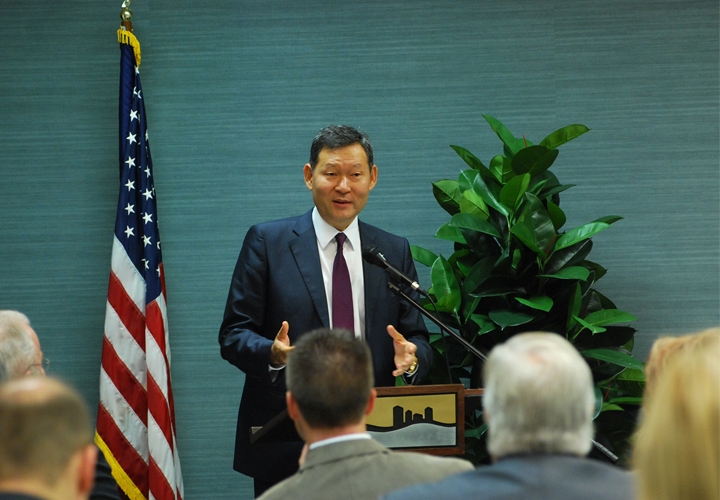 In his remarks to the Chamber’s International Business Council this month, Ambassador Kairat Umarov highlighted a number of challenges and opportunities experienced by his home country of Kazakhstan, including the country’s interest in expanding international trade.

Umarov was visiting southwest Missouri as a guest of Congressman Billy Long in order to learn more about import and export opportunities in the state. Prior to his remarks before the Chamber's International Business Council, the Chamber along with Congressman Long escorted the Ambassador on a number of tours of local manufacturing and agricultural facilities in order to discuss trade opportunities.

Kazakhstan, located in central Asia, borders Russia, China, Kyrgyzstan, Uzbekistan and Turkmenistan, and is the ninth largest country in the world and is roughly four times the size of the state of Texas. Despite its size, Kazahkstan has only a little more than 17 million people and a population density of less than 15 people per square mile.

The Kazakhstan economy is thriving. The country possesses enormous fossil fuel reserves and plentiful supplies of other minerals and metals, including uranium, copper and zinc. In addition it has a large agricultural sector, which employs 25 percent of the country’s labor force.

“The aim is to bring the best, highest quality cattle to Kazakhstan to raise the integrity of the meat sector because traditionally meat and dairy products were a strong part of the Kazakhstan economy,” Umarov said.

He further explained that when Kazakhstan gained independence from the Soviet Union in 1991, this sector faltered, but now the country is working to rebuild the industry.

Agriculture was certainly not the only sector in the economy impacted when the country gained independence. Kazakhstan was the last of the soviet states to gain independence and faced an uphill battle because its borders had been closed to the outside world for so long.

“(Kazakhstan’s) territory was closed during soviet times,” Umarov said. “Why--because of its huge terroritory, it was used to house nuclear weapons, to test nuclear weapons, and for bioweapon factories.”

“After gaining independence, we got rid of all of this,” he said. “Today, we are a non-nuclear state. To implement all of these ideas which we had, our president said that Kazakhstan should be known not by its nuclear power but by its economic development.”

Since gaining independence, Kazakhstan has grown rapidly, becoming the first country from the former Soviet Union to receive an investment grade credit rating. The country’s growth is in large part associated with extractive industries; however, as part of the Kazakhstan 2050 Strategy, widespread economic, social and political reforms were announced in order to position the country in the top 30 global economies by 2050. Part of the strategy calls for the economic diversification of single-industry towns and the direct election of regional governors, which were previously presidential appointments.

“This is the goal that we have put in front of us, and we hope we can get it because the previous program, ‘Kazakhstan 2030’ we accomplished two years ago,” Umarov said.

The Chamber’s International Business Council identifies export opportunities for Springfield area businesses, connects Chamber members with international trade resources and promotes the Springfield area as a favorable location for foreign direct investment. If you would like to investigate import or export opportunities with Kazakhstan, contact Emily Denniston at emily@springfieldchamber.com.