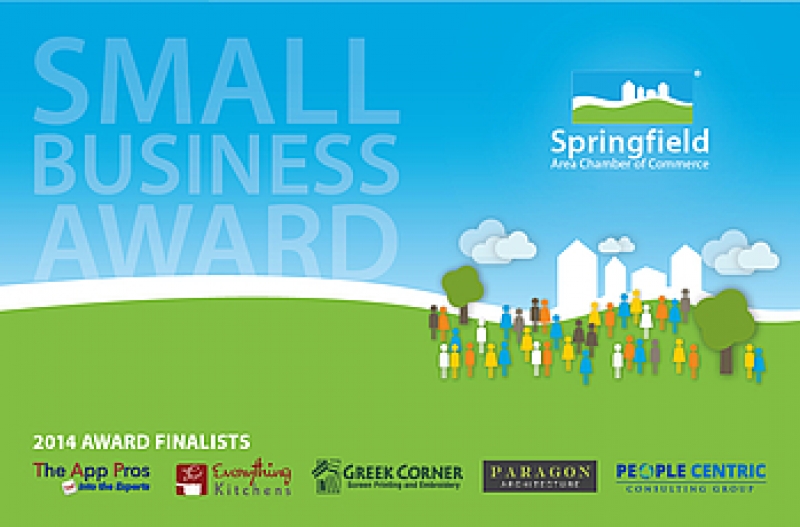 Five area businesses are finalists for the W. Curtis Strube Small Business Award to be presented by the Springfield Area Chamber of Commerce May 7.

An independent panel of judges chooses the award recipient based on applications, which consist of written essays covering the topics of company history, business or management philosophy, response to challenges, innovative products or services offered and community-oriented contributions.

Jody Chaffin and David Rutter were literally ahead of the curve when they founded The App Pros in 2011. They recognized that computing was going mobile, but while large companies were starting to utilize mobile apps, small and medium-sized businesses hadn’t fully embraced the new technology—in part because of cost. Chaffin and Rutter have worked hard ever since to help local businesses stay on the forefront of mobile technology. They were among the first tenants to lease space at The eFactory at Missouri State when it opened in March 2013, and looking forward, seek to partner with entrepreneurs who have a vision for using technology to bring new products to market.

At 19, Emily Church had no money for college and decided to start her own business.  She created EverythingKitchens.com in 2002 with only $500. In the last five years, her company has averaged 20% growth annually and is projected to reach almost $20 million in sales this year. From the beginning Church wanted to give back to the community, and today the company makes a monthly donation to help pay for the operating expenses of an orphanage in Haiti. They also donate a portion of the profits from every sale to World Vision, an international humanitarian organization.

A well-known brand locally, The Greek Corner began in 1983 as a retail store carrying Greek apparel. After the 2007 ice storm, 18 inches of water flooded the basement and destroyed almost everything in the screen printing production area. In 2009, The Greek Corner was purchased by the current owner, Jason Parke. Since then, Parke has replaced all but one piece of the original equipment, moved the company to a new location,  diversified the company’s services and increased annual revenue by 62% in 2012 and 30% in 2013.

The team at Paragon Architecture does a lot more than design beautiful buildings—they’re working to make communities safer. Since 2010, Paragon has used their expertise to help secure grants for more than 40 FEMA Safe Rooms in Missouri. The firm has designed safe rooms for public schools, colleges and community entities, and they’ve become experts on every step of the process. With more than 50 years of combined experience, the team, led by President and CEO Brad Erwin, has worked with a diverse range of clients, including the Springfield Regional Police and Fire Training Center, Crowder College and Springfield Public Schools.

People Centric Consulting brought together the best of both worlds when Don Harkey and Randy Mayes combined their two companies. Harkey, a former chemical engineer, owned Galt Consulting, which provided organizational, process and management consulting. Mayes owned The Success Coach Network, which offered coaching for top business executives. Combined, the two firms employ a “People Centric” philosophy that starts with the idea that everyone has their own natural talents and strengths. The company works with clients to develop systems that will help engage employees.