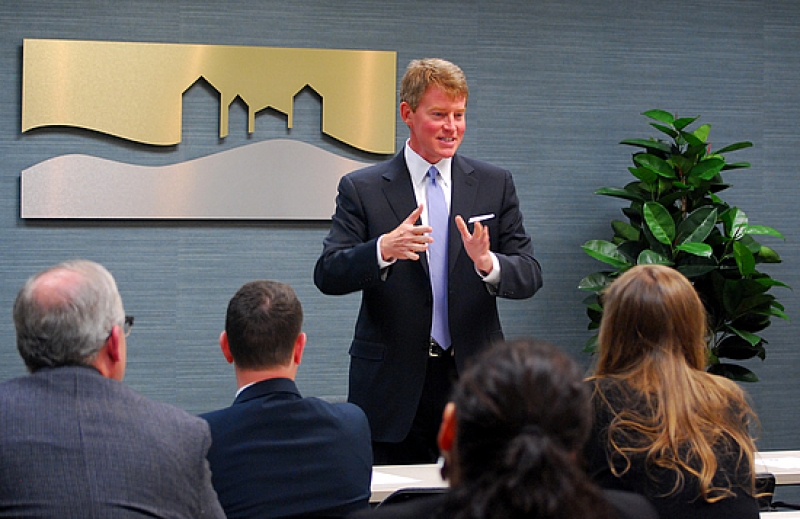 As the legislative session heads for the home stretch, the Chamber has arranged a number of opportunities for members to hear from and interact with state legislators and public officials.

Last week, the Chamber’s Governmental Relations Committee hosted a discussion with Missouri Attorney General Chris Koster. In his remarks, Koster outlined what he sees as the top challenges facing the state of Missouri, including education, long-term transportation funding, and Medicaid expansion.

In addition to the challenges that Koster outlined, he also highlighted a number of challenges posed by the system in which the legislature operates.

Referencing the challenges posed by term limits, Koster explained that running the state of Missouri is so complex that it takes legislators a full term just to learn Missouri’s most basic systems. Once that is complete, legislators have to jockey to move to the next chamber or focus on cultivating opportunities for when they leave the legislature.

“I don’t know one person who deals with the Capitol and the legislature on a daily or a weekly basis who doesn’t think that term limits are a bad idea,” Koster said.

Koster explained that because of term limits, legislators aren’t able to develop the same level of expertise in individual topics as they used to.

Highlighting the fact that two of the state’s three largest K-12 school systems are unaccredited or at risk of losing accreditation, Koster listed education as a problem that is at a turning point.

“Ten years from now we’re going to know whether we still have 50,000 largely economically challenged children who are in that environment, or whether we have begun to climb our way out,” Koster said.

While he acknowledged that fixing these school systems would take more than 30 years, Koster pointed to KIPP schools located in St. Louis and Kansas City as a scalable idea which could be a part of the solution.

KIPP, which stands for Knowledge Is Power Program, is a national network of free, open-enrollment, college-preparatory public schools dedicated to preparing students in underserved communities for success in college and in life. KIPP schools employ top educators and provide a rigorous curriculum. Students attend school from 7 a.m. to 5 p.m., and attend mandatory classes every other Saturday as well as during the summer.

In 2012, the KIPP program enrolled more than 41,000 students across the country, 86% of which were eligible for free or reduced meals. By the end of eighth-grade, 96% of KIPP classes outperformed their local districts in reading and 92% outperformed in math. At the college level, KIPP students graduate at four times the rate of the average student from a low-income community.

“We’re going to learn in the next 10 years whether KIPP schools and successful charter schools like them are still educating in Kansas City and St. Louis only 1% of that student population,” Koster said, “or whether we are able to scale up great ideas over the next ten years, so that those types of institutions are educating 10-12% of those student populations.”

Now that funds generated by Amendment 2 have been spent, the budget for the Missouri Department of Transportation is at risk of going from $1.4 billion to $385 million, according to Koster.

“We cannot maintain the system of roads that we have in the state of Missouri with $385 million, it’s impossible,” Koster said. “The roads will begin to crumble on us. So we have to find--as a community decision, not Republican not Democrat, but as citizens together--we have to find about $700 million to $850 million a year to give back to MoDOT.”

Koster listed toll roads, a sales tax, a gasoline tax or some combination of the three as the only options available to solve the problem in the long term.

Currently, according to Koster, since 1967 Missouri has taken in about 70 cents from the federal government for every 30 cents that Missouri spends on Medicaid. With Medicaid expansion, Koster explained that Missouri could receive another $2 billion if it joins the expanded Medicaid system.

“We’ve had a one-third, two-thirds match since 1967, and we have always thought that was a pretty good deal. Now all of a sudden a 10 to 1 match is dramatically too expensive and we won’t even take it even when the money requires no match from us now.”

Koster said that he feels rejecting Medicaid expansion is a poor choice for economic development.

“Even if you disagree with the President, which many do,” Koster said, “even if you don’t want to expand the health care system, this is still one of the best economic development ideas that has been presented to the Missouri legislature in the last 25 years.”

With the potential to create more than 20,000 jobs between 2015 and 2020 and increase labor income by more than $5 billion, Koster pointed out that Medicaid expansion would have a larger effect than either the sought after Boeing or Bombardier economic development projects.